Friday 4 May
I enjoyed sleeping in the St Jacques gite so much- but there was an early start to the new day. People were up and about by 5.30am- something I simply wasn't used to when I had gîtes to myself on the Cluny route! By the time I headed down to breakfast at 7.10am I was one of the last three left. There was a young Swiss woman at breakfast who had walked the Geneva route, who was also having a rest day before continuing. 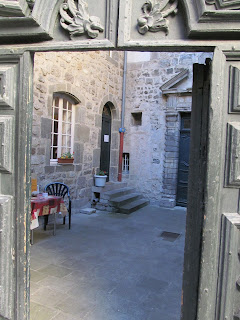 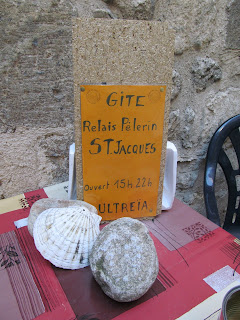 I had many fond memories of Le Puy from my first stay here, and enjoyed seeing all sorts of things again. About 8.30am I went into the Cathedral and found it was all quiet and peaceful in there as the pilgrim Mass and blessing were over, but the tourists hadn't yet arrived. I wanted to say some prayers for some Marists I knew while I was there. 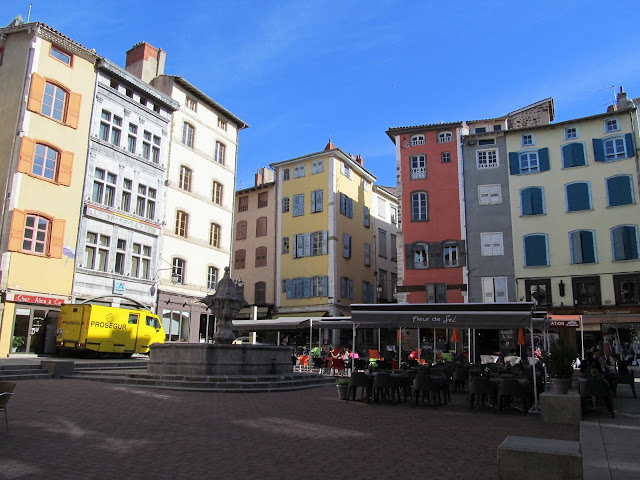 I had a map this time, all the better to explore with, but had some 'jobs' to do first. (This is quite a 'comforting' aspect of a rest day I find- pottering away doing a few 'errands'.)  I tried to reserve my next night's accommodation in Montbonnet, but it was 'complet': surely I was back in proper pilgrim territory! However, a very kind woman at the Tourist Office rang and booked me a bed in another gîte. Then I found the Post Office and someone kind there helped me post a package and get stamps for some postcards.

Le Puy has an array of signs that show its significance as the starting point for many on the route to Compostelle. 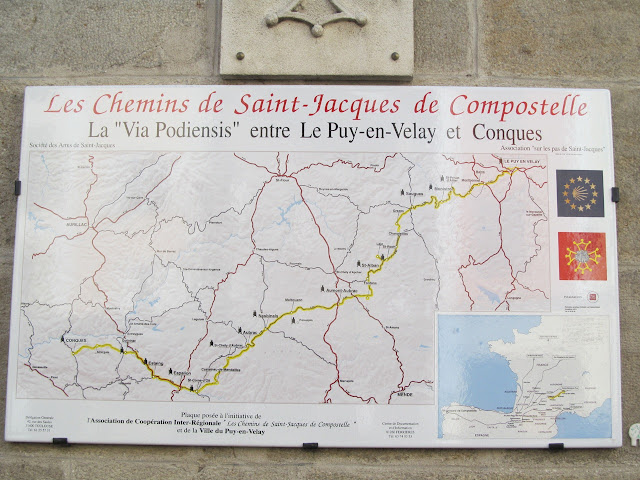 Le Puy to Conques- this was the section of the route I had walked in 2008 that I was hoping to re-walk. 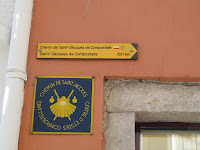 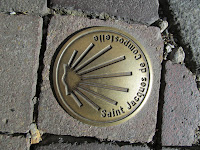 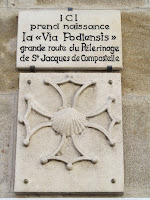 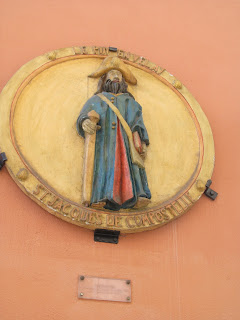 Le-Puy-en-Velay though has also held importance in its own right as a Marian pilgrimage centre, dating back many centuries. In 2008 I saw and climbed the statue of Our Lady made from Napoleon's cannons, but this time it was shrouded in scaffolding for restoration. 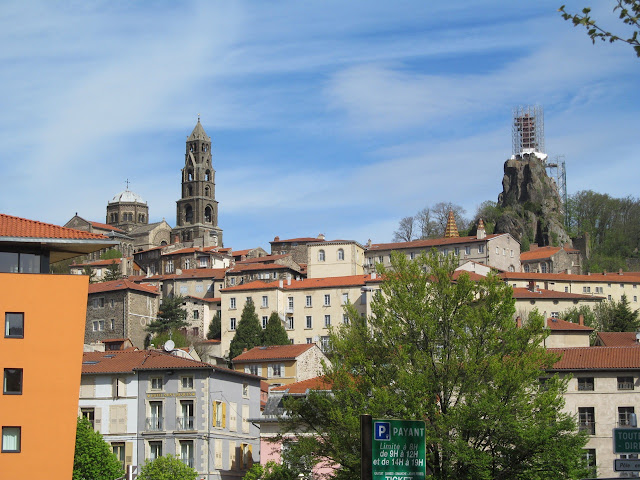 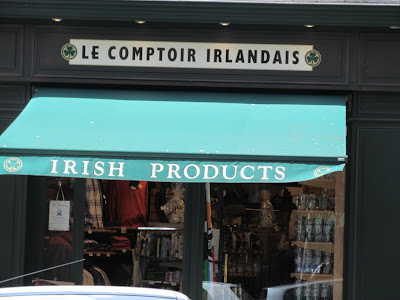 One of the most unexpected things I saw today in Le Puy was this Irish shop! 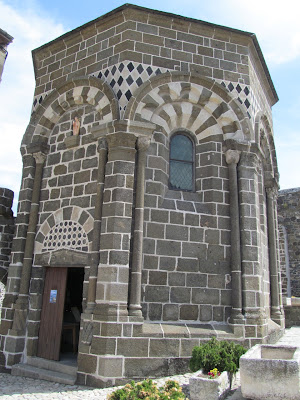 I returned briefly to the beautiful little historic chapel where I had had my 'meltdown' the previous day. 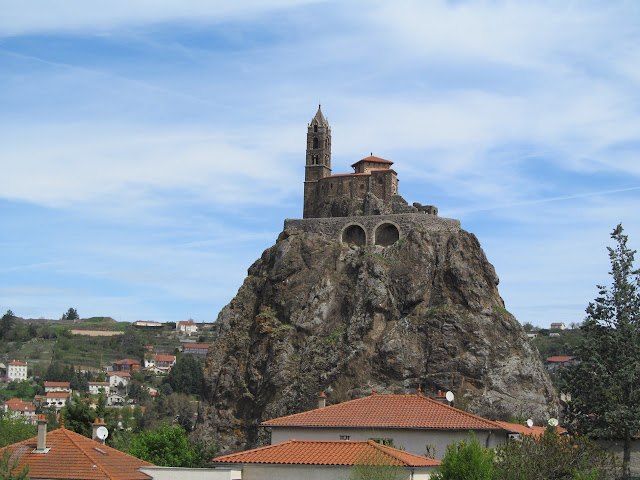 But the place I most wanted to visit again was St Michael's chapel on top of this rock. 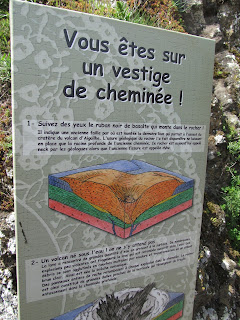 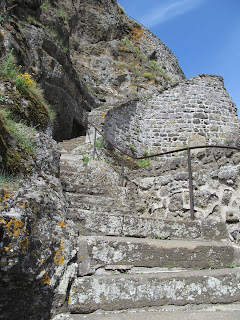 Surprisingly, after two weeks of walking, I found the steps seemed longer and steeper than they had when I had climbed them in 2008!

There were new signs explaining the volcanic activity that had led to the rock being here that I found most interesting. 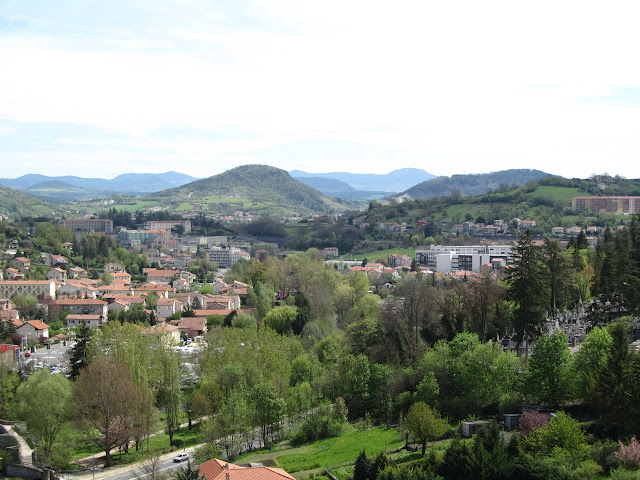 The views you got from the rock were wonderful. 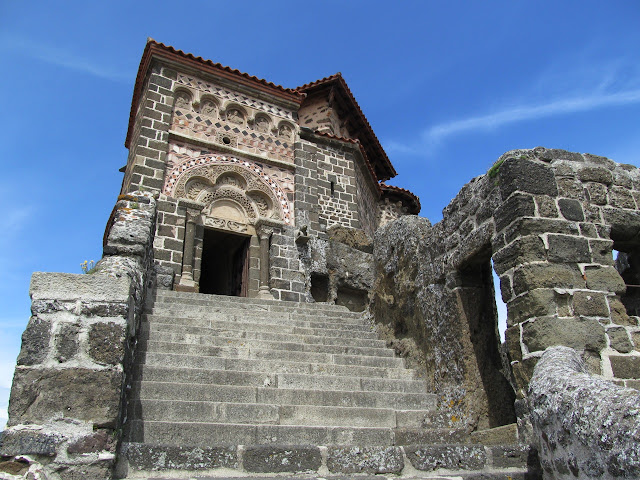 This time around my experience of the chapel was different. Last time I was the only one there and the atmosphere was quite foreboding, but this time I was later in the day/season, and there was sunshine to brighten things up. The details were superb, both inside and outside. 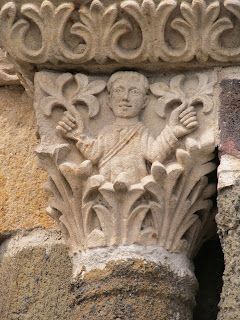 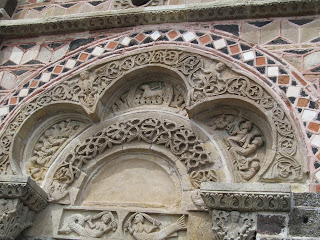 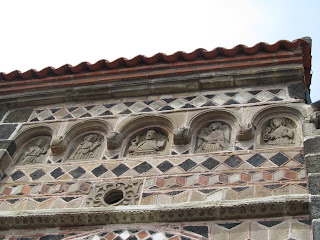 By the time I had finished my errands and my exploring, it was 'too late' I thought for French lunchtime. But I discovered that the Hotel Dieu restaurant, near the Cathedral, was still serving. It had looked far too 'flash' for me the previous day, but when I examined the menu, I discovered there was a menu option for a very reasonable 14 Euro, and I had a delicious, filling, salmon dish.

Next I decided to head downtown to find food for the next day's walk. Lo and behold, I saw a group of five sitting on seats in the sunshine in the square. It was Francis and co, all looking suitably exhausted! I didn't feel so bad about my own exhaustion the previous day when I saw them, and I knew exactly why they were all exhausted... There were big hugs all around. We found a place to have coffee/chocolate on the hill up towards the Cathedral. Tourists were gawking at the five who all still had their packs and boots on, an impressive group of pilgrims, while I looked like the fraud at the rear with just a daypack on!

Later I lay on the bed resting my feet while the five showered and cleaned up, and we all went out for dinner in the evening. I was so glad to see Francis and Elisabeth again, but was sad this meeting was to be so short... Next morning they were all returning home to Burgundy by early train, while I was to head off uphill along the Le Puy route towards Montbonnet....

And so this tale of my Cluny walk comes to an end. Following this walk I carried on along the Le Puy route as far as Conques. Then I had a break from walking, staying with some friends in Moissac for nearly two weeks. After that I was off to Spain for three weeks walking on two sections of the Camino Frances. I reached Santiago for the second time on June 21st.

I already have a blog detailing my walk in 2008 from Le Puy to Santiago, Il faut aller doucement, and when I get 'around tuit' I will add some photos and updated info for my walking after Le Puy in the appropriate parts of that blog. There might be just one more post here- just a few of the photos I love the most from Le Puy onwards...