At the end of breakfast time Mme Destre and I sang 'Ultreia' together -thanks Lyne for teaching me that!- then I headed off to find the marked alternative route from Cuinzier to Pont de Mars, to rejoin the Chemin. 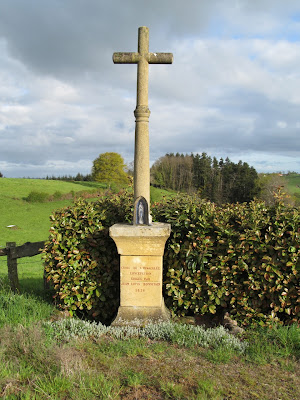 The sun was shining, and the walk passed through some beautiful countryside. 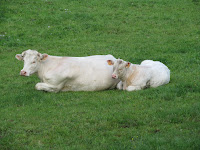 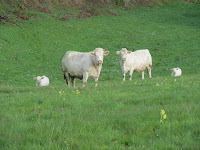 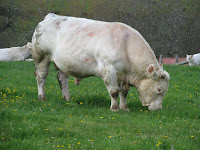 There were a lot of Charolais cattle in the fields today. If I understood what I was told correctly, this was part of the area they originated from. 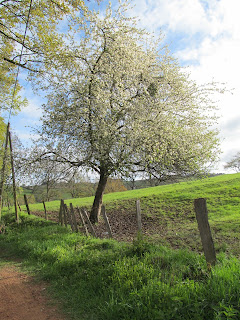 It was very much a 'spring' walk today- with quite a few blossom trees, and also some rather muddy paths after the rain yesterday. Again, there was much 'up and down' walking. It tended to be a mistake to take too much notice of roadsigns that indicated a distance: often that distance was a direct valley route that was several kilometres shorter than the more picturesque but hilly route that we were to walk! But by now, on day five, my body was getting into more of a rhythm, and as I started each hill, I just slipped into my slow but steady rhythm, and just kept on going- like the tortoise rather than the hare. (I was glad to stop at Charlieu though rather than walk the extra 9km on to the gite at Briennon: I found my days were quite tiring and long still with all the hill climbs.) 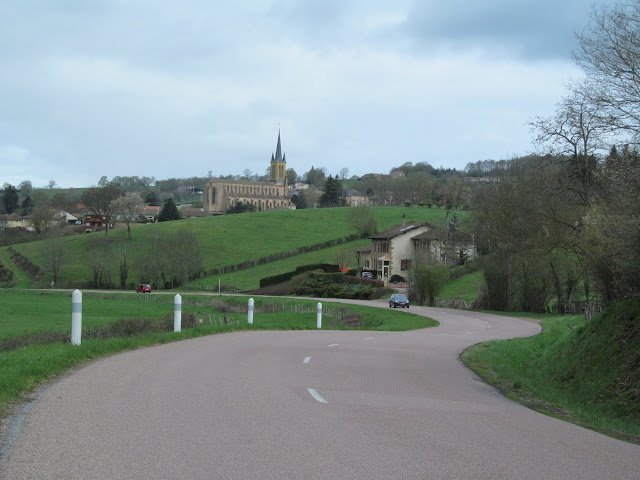 I think the village up ahead with this interesting looking church is Mars- but we never walked through it. The chemin took a route through countryside rather than the road route that went closer to this village. 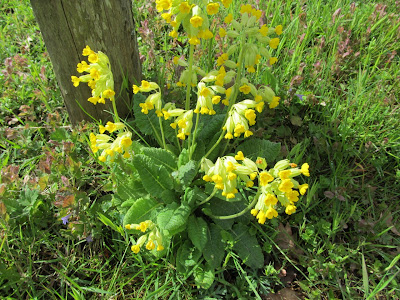 Time for a note about these little flowers, which I think are a wild variety of polyanthus. They appeared often in the Burgundy region in the early spring season while I was walking there, and in French were called coucou. A Camino friend used the phrase 'coucou' often in her e-mails and I hadn't been sure what it meant- but this flower is its origin. 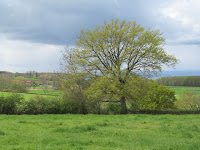 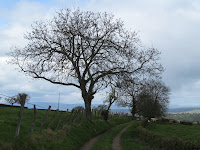 There were often trees in the landscape today. Some told the story that it was 'still winter', while others carried more of a 'spring greeting'. 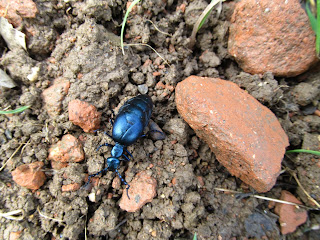 One of the things I love about walking on these long distance paths is the way you end up paying attention to what crawls along at your feet. Today the iridescent blue of this beetle took my eye. Beautiful. 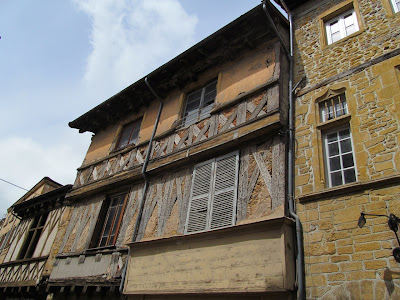 Charlieu was an interesting town with much of its medieval past still evident at its heart. 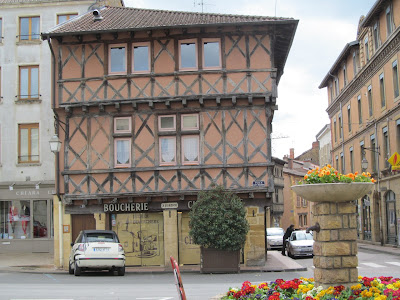 I had some time to explore and Mme Destre had told me to make sure I visited the Abbey. 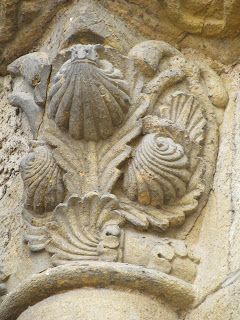 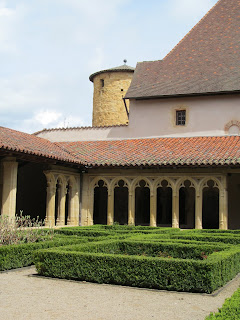 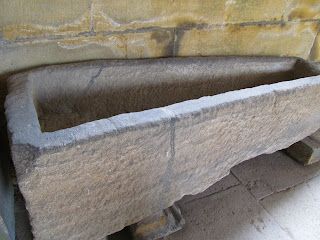 The cloister was beautiful, and there were 'shells' in a few places that told a story of past pilgrims passing through this area. 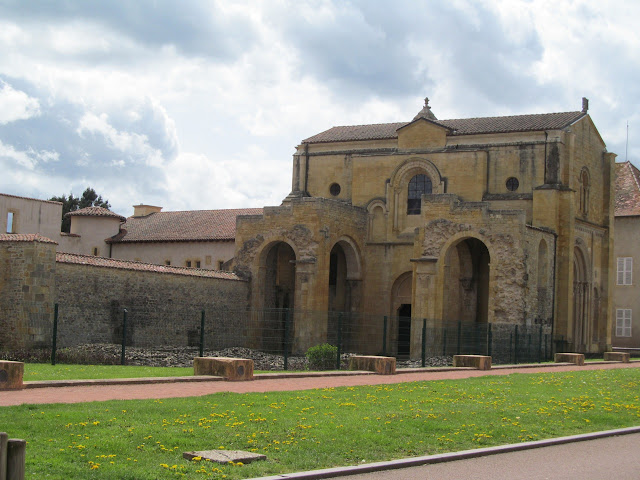 What remained still was impressive, and it must have been even more so in medieval times.

I had absolutely the loveliest of evenings here in Charlieu with the kindest of families. Mme Destre had rung ahead for me. Both of the people who were on the list here as offering 'accueil jacquaire' were otherwise occupied as it was a Sunday. (Mme Destre explained that Sunday was very much a 'family day' in this region, so often this happened on Sundays.) But one of those AJ people organised with friends of their's that I could stay the night.

It was such a pleasure to share a meal with this family in the evening, and I felt very much 'at home' with them. I'd managed to break my walking pole during the day, and the husband found a way to mend it for me. The son returned home from a Scout's event in Le Puy that weekend, and it was interesting hearing about the kind of service scouts rendered in France, eg helping the disabled on the Le Puy Chemin over summer. Election results came out for the first round of presidential voting this evening, and my hosts were very concerned at the increase in the extreme right vote (as were others I was to meet over coming days in France.)

Francis rang during the evening, and we had a long convo. I told him how I was a bit concerned about a couple of my toes after the descent into Le Cergne. The woman I was staying with had overheard, and organised a basin for me to soak my feet in. It was like a 'washing of the feet' but was so natural.

This was an evening to remember, and to be thankful for.
Posted by Kiwi Nomad at 17:59