I'd fallen asleep by 9pm the night before, and woke this morning knowing I had a hard climb ahead of me up near the summit of Mont St-Rigaud. But I was glad to discover that much of today's climb was at a more gentle slope than yesterday's. The hardest steep bit was on the very stony path just before the road towards Col de Patoux at the top. 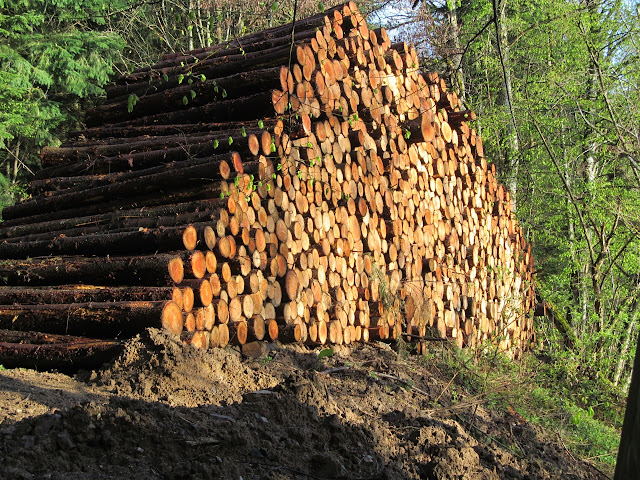 In this area there was a lot of forest, and woodpiles of various kinds were a common sight. I quite liked taking photographs of various wood stacks, and the sunshine on this pile as I left the chateau environs caught my eye. It was great to have some sunshine after the heavy rain of the night before. 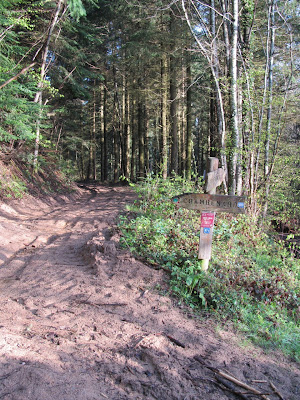 I must admit I had a few jitters when I saw the beginning of the ascent on this very muddy forest path, and thought I was indeed in for some hard, slippery climbing. But it wasn't long before the worst of the mud was behind me. 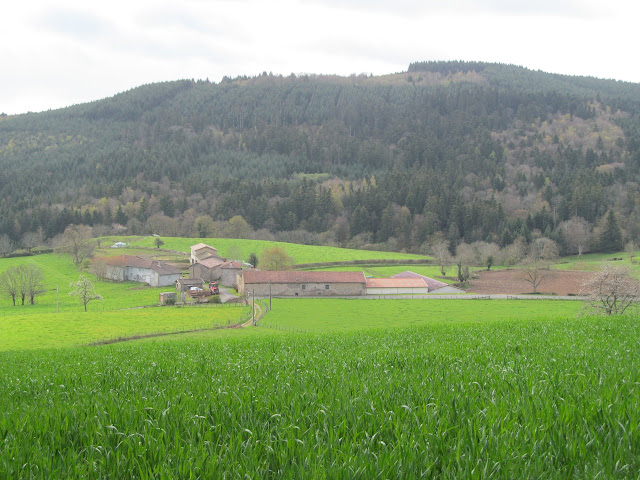 Francis had told me this whole day was in forest, but I was to discover that compared to 'whole days' in New Zealand forest, there were actually some clearings where I could see views of 'civilisation', and I did pass near a few farms such as this one. 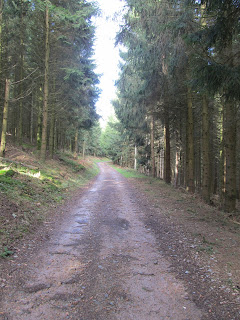 Here's a typical view of some of the forest paths I walked on, wide and easy underfoot.


As I approached Col de Crie around 10am, two fellow walkers appeared behind me on the track, the German couple who had also stayed at Gros Bois. They were walking the Camino in sections, and had started this time from Taize. They had already had previous weeks' experience of walking a route that had few other walkers, and they had appreciated and retained in their memories all the others they had shared time with. 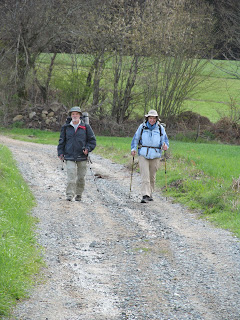 The three of us had a bit of an adventure when we reached the road just before Col de Crie. To our surprise, a car appeared, heading quickly uphill. I only just managed to get far enough across onto the edge of the road when the driver passed us, but he managed a cheeky kind of wave as he drove by. Next minute, there was a second car coming: and this was the rural gendarmerie who were in pursuit.

As we reached the tourist shop at Col de Crie- an unexpected and welcome source of a hot chocolate!- the gendarme's car returned. They'd lost sight of the car they were pursuing, and wondered if we had managed to get the registration plate. We hadn't- it had all happened very quickly, and staying alive as pedestrians had been our priority! But the young woman and male gendarmes were very pleasant and friendly, and it was nice to talk to them. 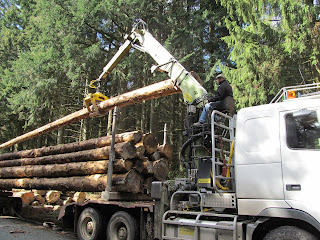 We'd timed it well at Col de Crie it seemed, as the tourist office had only just opened. The young woman who served us our hot chocolates was also very cheerful.

Nearby, there were more signs of the timber industry of the region.

So far the overall altitude gain had only been about 70m. But from Col de Crie (620m) there was much more climbing as Mont St-Rigaud lay at some 1000m. 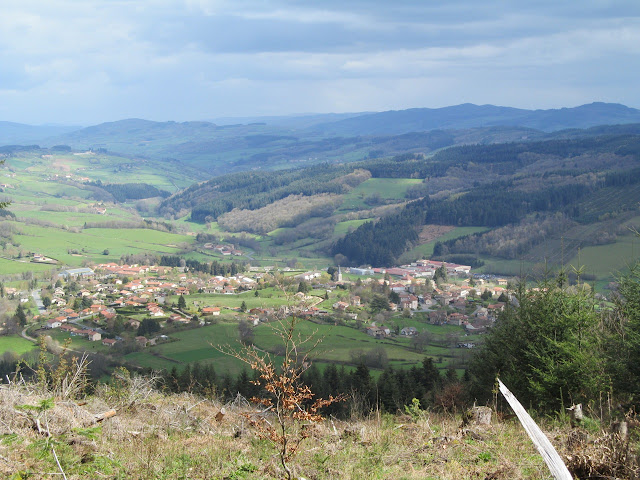 Again, there were some views through the forest.
I think this was probably the town of Monsols(540m) down below. 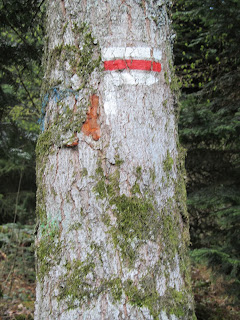 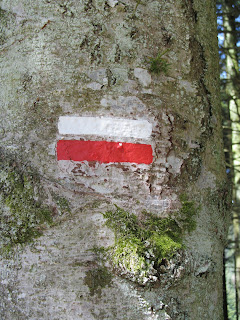 But there was indeed a lot of forest to walk through. At this stage the route was shared with the GR65, and the red and white balises for the GR65 were prominent. And although the route was clearly marked, the markings were not always frequent on straight sections. My biggest fear was missing a symbol for a turn (as on the right hand photo above) and getting lost on some remote forest path. Not for the last time, I was soon praying for some signs to appear ahead of me soon as I walked! 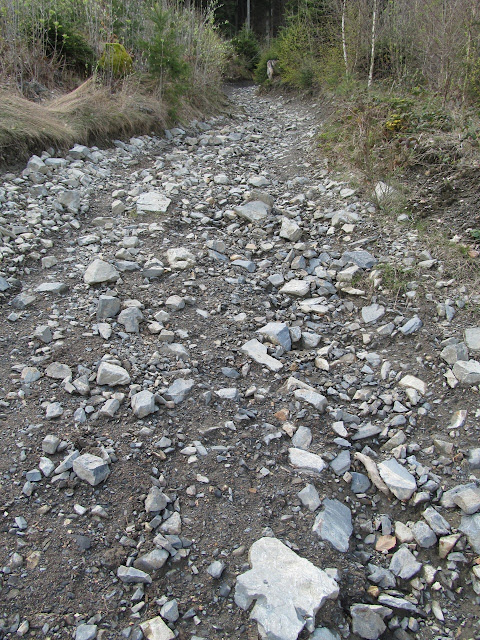 I always like to mentally prepare myself for tricky parts of routes, and I had read the Chamina guidebook closely for this section, so I could talk myself through the 'hard' bits. I knew that after a bit of road walking from Col de Crie, I had two and a half kms of forest, then one and a half kms of stony path, then 2km by road to Col de Patoux. I was expecting the hardest climbing to come on the final road ascent, but actually, it came on the stony path which was very steep in parts. It was good being able to repeat to myself though that I only had one and a half kms of this! Francis (a deacon) had given me a blessing of St Jacques before we parted the day before, and I also drew strength from this as I climbed- it didn't seem as if I walked alone. 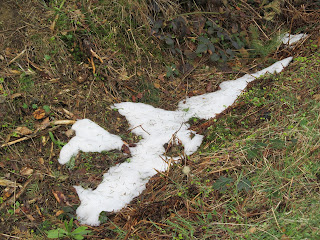 Once I reached the road at the top, there were some patches of snow lying around. Strangely though, it wasn't too cold up here- though I had worn raincoat, hat and gloves during some lower parts of the climb.

I got a wee bit confused about the route once I reached the road, as we parted ways with the GR65, and there were only the Chemin 'shell' balises to rely on, and on the straight road, there weren't too many of them. I was glad I had the Chamina guide to reassure me I was 'right'. 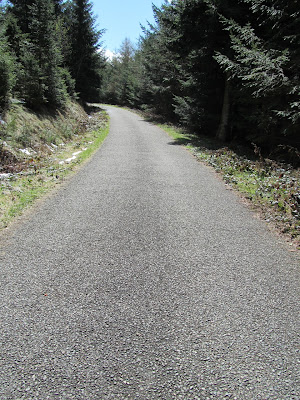 Here's the road section near the top of Mt St-Rigaud, much easier walking than I'd expected. I was feeling pretty pleased with myself as I neared the top, as I had managed the day's climbing and forests quite well so far. The chemin doesn't actually go quite to the summit, which is the high point of the Rhone departement. 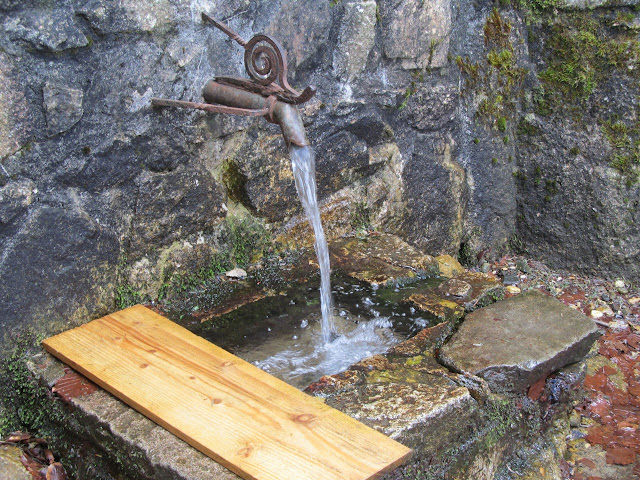 Since I still had so much energy, I decided to make the diversion to the sacred fountain of pilgrims, which wasn't too far from the main route. The waters are reputed to help with various things, including infertility and arthritis. I decided to plunge the wrist I broke two years ago into the waters- and I can assure you the mountain waters were icy cold! 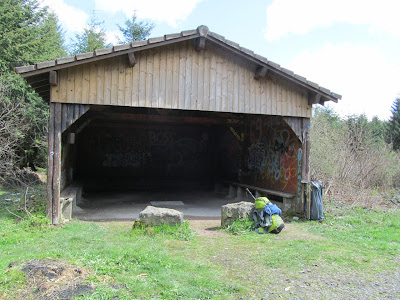 Not far away I came across this little cabin, and at about 2pm, I sat and relaxed and had lunch. I tend to like to get things like 'climbs' out of the way before I can relax and eat properly! The sunshine even came out for me. A couple of jovial Frenchmen also passed by: remarkably, these two had taken only two days to walk from Taize. I suspected they had to be Chemin 'beginners' though to be doing such long days- and in subsequent days, they did indeed reduce their daily distances. They were clearly very fit, but such distances as they had walked will give blisters to most people, as had happened for them. 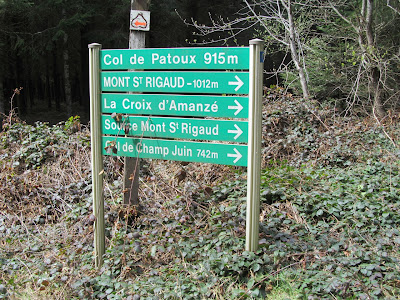 Once I reached the Col de Patoux, mostly the day involved descents. I had done a good job of mentally preparing myself for the climbing of the day, but not so much for the next section downhill. And it seemed quite a long way before the town of Propieres finally came into view. As was quite typical of this route, after all the descending, there was a wee grunty climb up to the town! 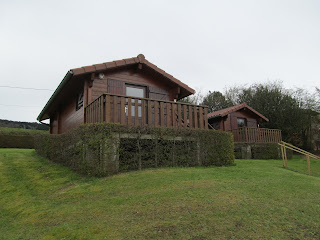 I went 'shopping' in Propieres and bought supplies before I headed another one and a half kms downhill to the camping ground at Azole. I had no idea what a wonderful chalet and kitchen I was going to have, and I never bought 'proper' food for cooking, which was a bit unfortunate. Chocolate biscuits might be nice to eat, but they are probably not the best diet to give strength for the next day's march! 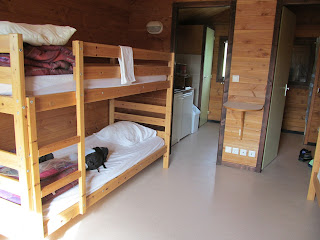 The camping ground at Azole had been one of Francis' suggestions, and it really was lovely there. The chalets were set out beside a small lake- and I suspect that in summertime it is fully booked with families. But late in April it was easy to get a booking. I had a chalet to myself, the Germans had the adjoining one, and the two Frenchmen were in a third one.

The local woman who came to collect our fees was very cheerful and friendly. And it seemed like the few pilgrims I had met had already acquired that 'glow' that comes from being in the mountains.

I had intended to ring Francis this evening to let him know how the day had gone... but it was a pleasant surprise to hear my phone ring, and it was his wife ringing to see how I was. The call was very much appreciated.