Monday 23 April
There were a few 'jobs' to do before I left Charlieu. Firstly, off to the nearby supermarket. But I managed to get confused and lost on the five minute walk back to the family's home. Honestly, it amazes me how I can find my way around the world and safely home again, yet get muddled up with left and right if I turn a few corners... I was so confused, I ended up ringing my host's phone number, not realising it was the mobile that the husband had at work. He came and rescued me.

With that all sorted, it was time to walk down to the Post Office. I had a few 'surplus' items to send on ahead to my friends in a gîte in Moissac. (You'd think that having walked one Camino already, I would have packed 'better'.) But finally, much later than usual at around 10am, I was ready to leave Charlieu. I hadn't managed to organise the night's accommodation yet- as it turned out, a phone number had been changed from what was in the guidebook. And my host told me that if I had problems getting a place for the night to ring them back again, and the husband would come and get me, then return me next morning to where I had finished. I tell you, sometimes on the Cluny route I was just blown away by people's kindness. 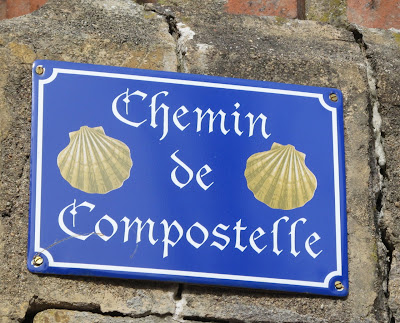 On the way out of town, I walked down the Chemin de Compostelle. It was so far to Santiago from here, yet the route was already heading that way, a reminder of past pilgrims. 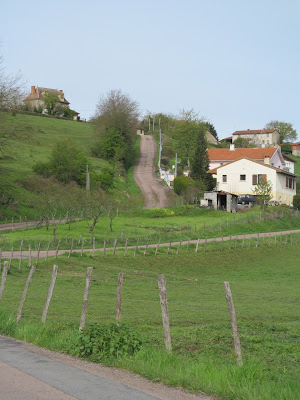 I know I keep saying it's hilly on this route, but I don't show you much evidence. However, the scenario in the photo above is fairly typical. Notice there is a flat road below the hill- you could reliably predict we won't take that, but will take the alternative hill climb road! 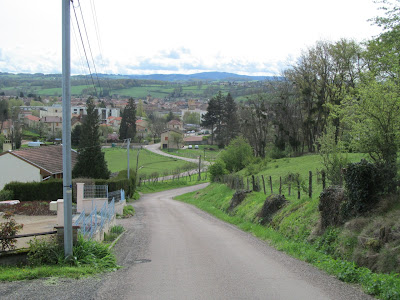 And this photo looks back down that hilly road climb, back to Charlieu. 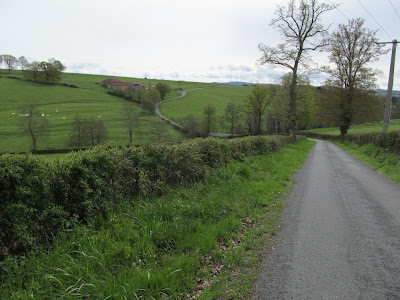 The route kept meandering up and down for quite a while through some beautiful countryside. There weren't many signs on this road, and I was seriously hoping I hadn't missed seeing a turn-off somewhere. This was another place where the altitude profiles in the Amis guide were shown to be quite inaccurate: they showed the whole day's walk as quite 'flat'. 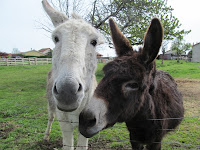 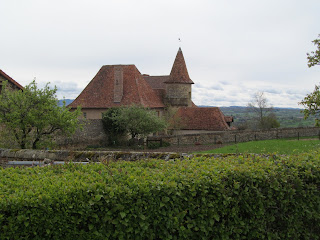 Finally as I neared a crossing over a main road, there were more signs on the route. I passed a small chateau and some more donkeys.

It was supposedly only 4km to the next town of  St-Nizier-sous-Charlieu, but it seemed to take me ages. However, I arrived in time for the restaurant to be serving lunch, and I had a good hearty meal there surrounded by workmen. 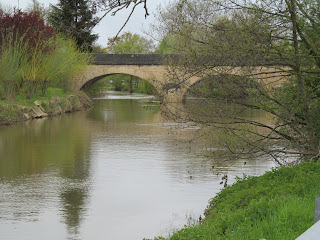 As I left the next town, also by the Charlieu river, another river crossing was just ahead- over the Loire River.  Some years back, I had cycled along routes on the lower reaches of the Loire, and I was really looking forward to seeing it flow higher up its route, such a natural river still, providing plenty of habitat for birdlife. 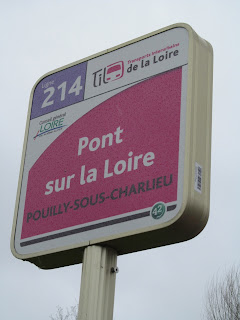 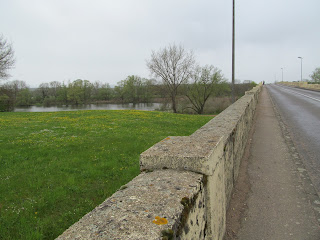 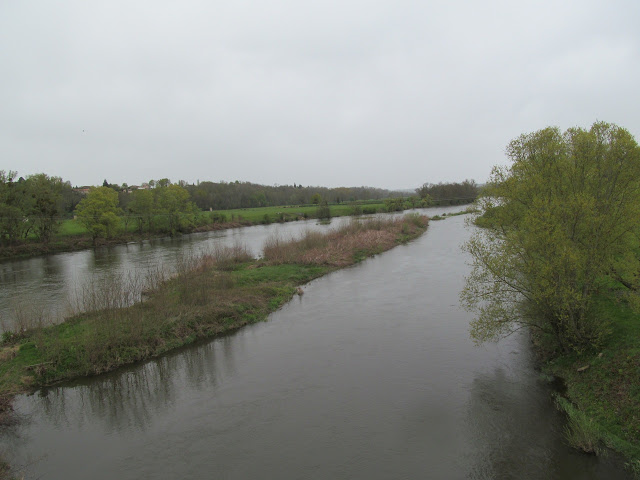 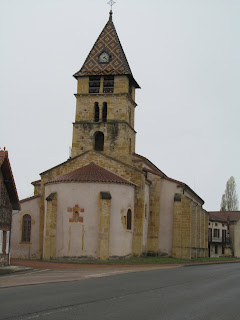 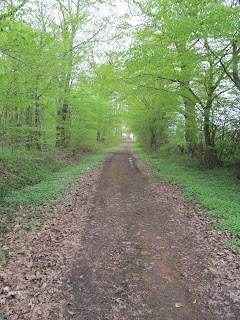 Some nine kms after the day began in Charlieu, I arrived in Briennon, where there was a gite that the others I had met on the road were staying last night.

And the route now became much flatter- which seemed almost too hard to believe! I was in a 'valley', with attractive bush as well. 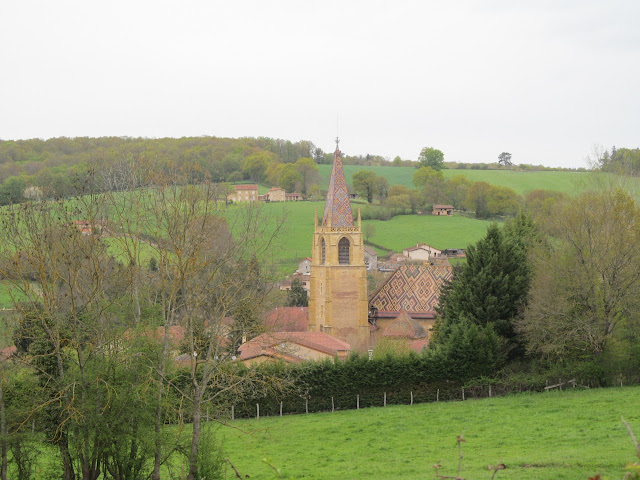 I was really looking forward to arriving in La Bénisson Dieu, as Francis had sung the praises of the old abbey here, and I had seen some impressive photos of it. 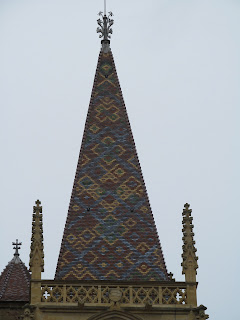 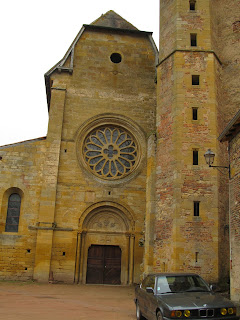 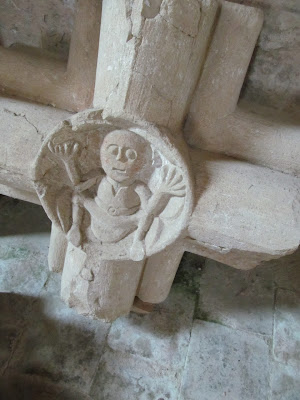 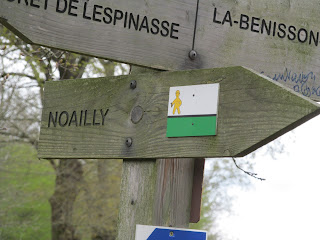 It was nearly 4pm by the time I left the Abbey, and I was getting a bit anxious about the onward walk still ahead of me to find Noailly, which was off the Chemin a little. There I was hoping to meet up with Lyne and Denis who I'd come to know along the Camino in 2008: if I'd waited a little longer around the Abbey, I actually would have seen them arrive there in their rental car to explore. 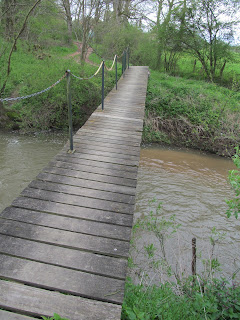 A somewhat adventurous stream crossing appeared ahead of me on the way to Noailly- the stream was full and fast flowing, and the stepping stones looked slippery. I was so glad to realise there was a wooden footbridge nearby for crossing!

And despite my anxiety about finding Lyne and Denis, all turned out fine in the end. I had only just stepped off the forest path of the Chemin to take the road to Noailly, when a car drove past. It was my Camino mates from Quebec- perfect timing! They took me by car the last km or so to the village. Then they spoke with locals about the gîte, found out the Maire was open, and we were able to go in there and arrange for all three of us to stay the night in the local gite. Just like old times! Well, almost... I still had to do my pilgrim washing, as I had some very stinky clothes, and it was a bit of a mission working out where to put the drying racks so it could get dry. But my Quebec friends had lots of clothes to change into from their suitcases!

We decided to 'eat in' as that gave us more time to talk... and we eventually found the local shop. The strange combo of food we found made it an 'odd' kind of meal, but we'd had some of those as pilgrims in 2008 as well! It was a cold night, and the communal part of the gite downstairs was pretty hard to heat, so we soon moved upstairs into the dorm to talk. Being in a dorm was like old times as well. Later a gite resident of five months standing arrived home, and he had already heard we were there: the news about two Canadians and a Kiwi arriving on the same night had quickly gone around the district. Soon it was time to take to our bunks for the night, like old times...