Tuesday 1 May
It was a bit hard to be sure of the distances for today's walk from the Amis guide, as there were a lot of 'parentheses' for detours off the chemin. Francis had worked out it was 24km, but I had a sneaking feeling it was actually 28km, as it turned out to be.... I was on the way by 7.30am, but it was to be nearly 6pm before I arrived at the gîte for the day! 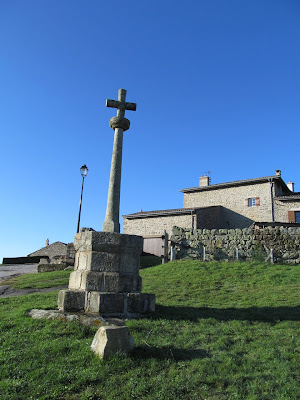 It was just a kilometre to Montarcher from La-Chapelle-en-Lafaye, with a climb of some 70m altitude to reach 1150m, and you could see where you were headed uphill. It was clearly an historic village with all sorts of buildings and religious sights to see. 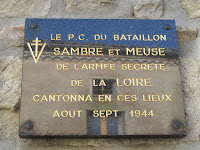 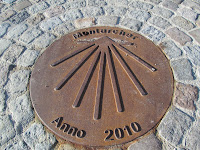 I know I have read something about the Resistance in Montarcher in WW2, but am not sure of the details. (Will have to Google more determinedly later!) 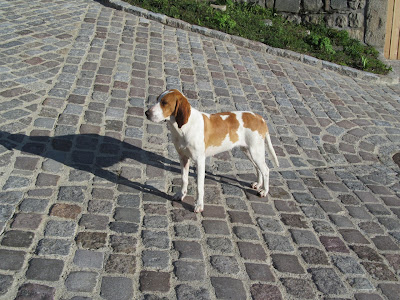 Unfortunately I had a 'companion' for the first part of the morning- this absolutely beautiful dog that was clearly lost. I had seen it around the gîte the previous afternoon, and had assumed it belonged to one of the horsewomen. But it followed me when I left La-Chapelle-en-Lafaye, and I couldn't make it turn back. It was obviously very well cared for and loved, and had a beautiful nature. (I wrote a blog post about it that evening that I'll re-post next.)
I took a while wandering around the village, partly because it was interesting, and partly because it took me a while to find the correct walking path out of it- and also because at this early part of the day, I didn't realise quite how far I had to walk this day... 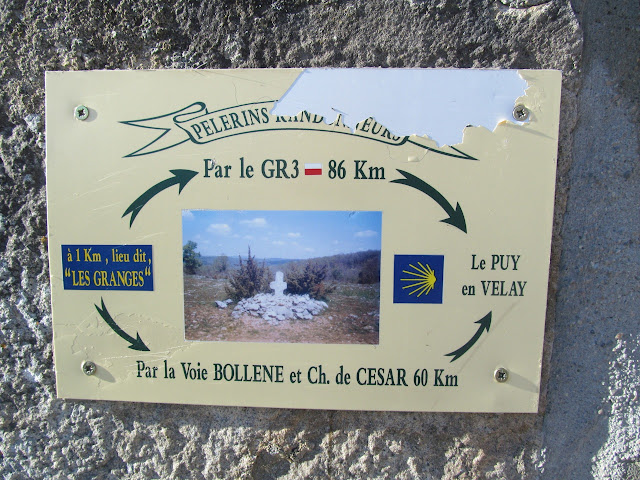 I had been well warned by Francis that there was a crucial deviation in paths on the route today, just after Montarcher. One path took the GR3 which he had walked, and he said it was a difficult, mountainous route with very long stages. It was also a much longer route this way to reach Le Puy- 86km instead of 60km. He told me I should make sure I took the path that followed the chemin of St Jacques, not the GR3, at this deviation. He'd told my Quebec friends to tell me the same thing. And M Jolly had outlined the two alternatives to my two strong male companions in the gîte the previous day and suggested that they would probably prefer to take the Chemin de St Jacques here. 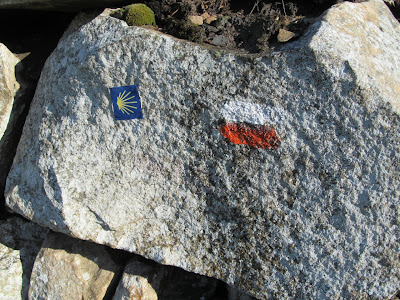 I was watching the signs in this area very carefully, determined not to miss the turn-off! 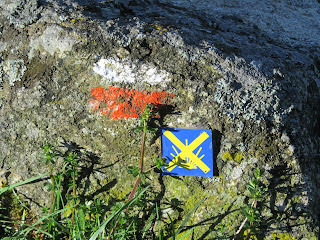 It was just as well I was watching closely, as the turnoff was only marked by the small, regular signs.

Here you can see the yellow cross over the coquille symbol indicating the chemin de St Jacques doesn't go this way, while the red and white GR3 symbol shows its way. 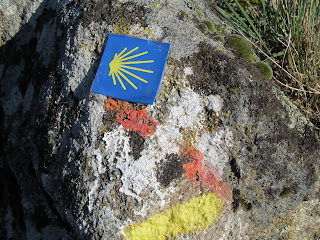 And here this is a coquille symbol indicating to go left, while the (quite faded) red and white GR3 markings are 'crossed' so you don't go that way.

Oh, and at this point also, the Chamina guide with its 'proper' maps was consigned to the bottom of the pack, since it followed only the GR3 route- and I had to rely on the sketchmaps of the route in the Amis guide. 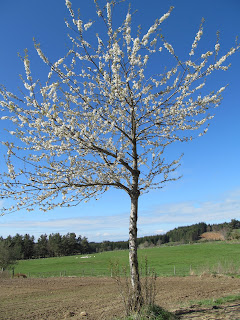 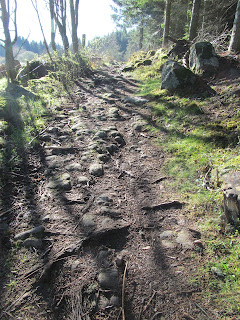 The route today was mostly fairly easy. There were some relatively short climbs and descent, but quite often the route was along wide flat sections that gave great views. This hillier section is part of the la Voie Bollenne, which from what I understood was a medieval name for a section that followed the route of an old Roman road. 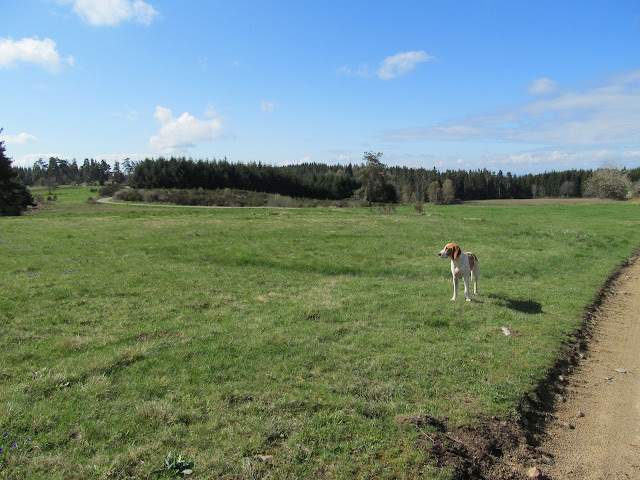 It took me quite a while to be able to leave the dog behind. I met an old man out walking who promised to keep hold of him for a while so I could get ahead, but the dog found me again. Eventually I reached another hamlet where two people were cutting wood. They had a dog of their own, and understood the problem, and what a beautiful dog this was. It took quite some cajoling, but we managed to get the dog inside their yard, and the woman was going to ring around some people in La Chapelle in an effort to find the owners, who I am sure must have been frantically looking for their dog. The dog howled loudly as I left, but I do so hope his owners found him again. 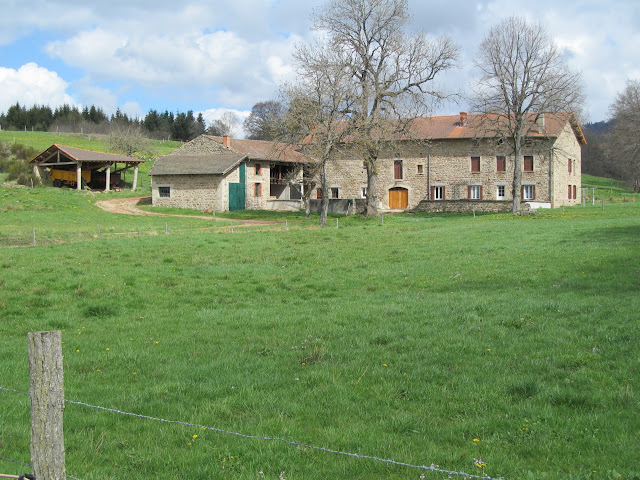 There were many beautiful stone buildings in this area, some of them quite clearly historic.
I passed another lavoir, and always find it an interesting reflection on French culture that these are so often preserved and considered important. 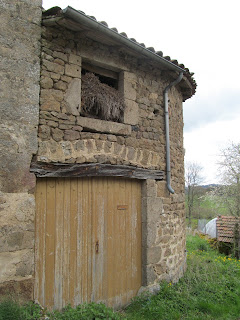 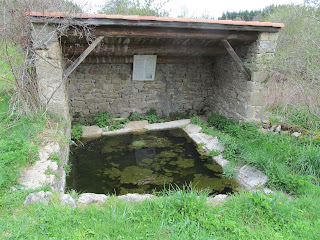 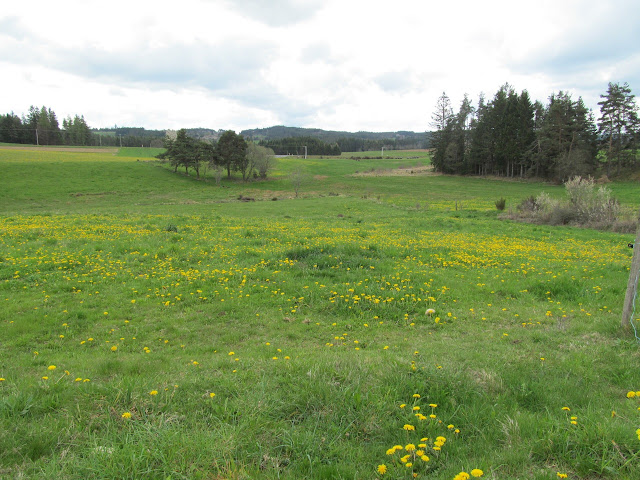 This was also a dairying area, and there were huge numbers of dandelions flowering in some of the fields. 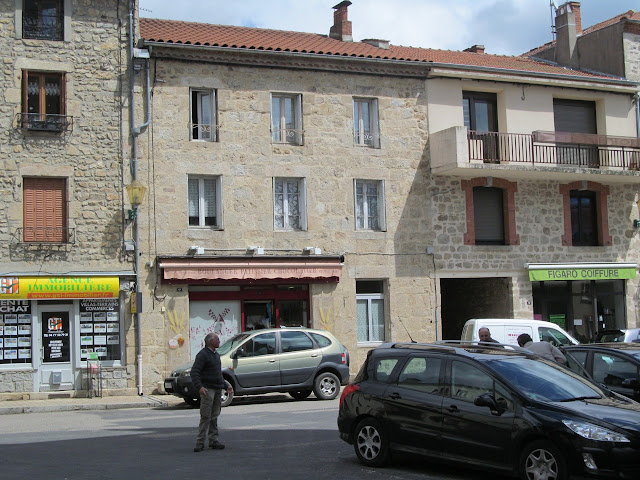 The walk was beautiful today, but the kilometres seemed to be passing slowly by. By 12.30 I had reached Usson, another town with interesting buildings, but I was starting to realise that I had only walked half the distance the day was going to require... It was May 1st, and I had little food with me, but was glad to find the boulangerie was still open. "Everything" might close in France on May 1st, but the French will still need a place open in the morning to buy their bread! 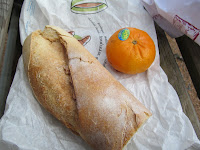 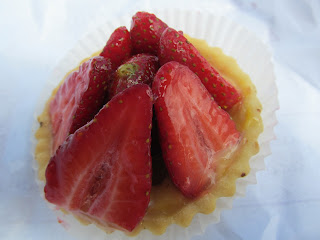 So I sat on a village seat and ate my humble bread with a tin of pâte, but then indulged in this beautiful pastry bought fresh from the boulangerie. 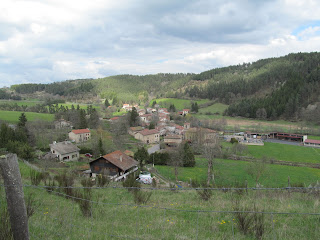 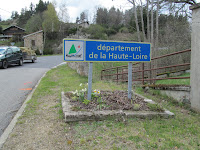 It was a beautiful walk, but the next 6km seemed to be 'longer' than that, and it was already after 3.30pm before I passed through Pontempeyrat. I also moved into the Haute-Loire departement here though, which showed me I was definitely getting closer to Le Puy. 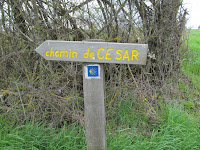 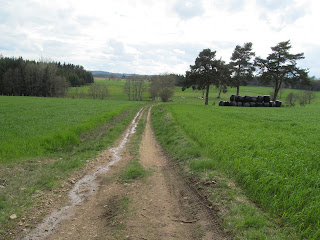 It was definitely a day for historic paths, and for the next few kilometres, I was walking along a path named after Caesar, bringing more reminders of the Romans even after all these centuries. 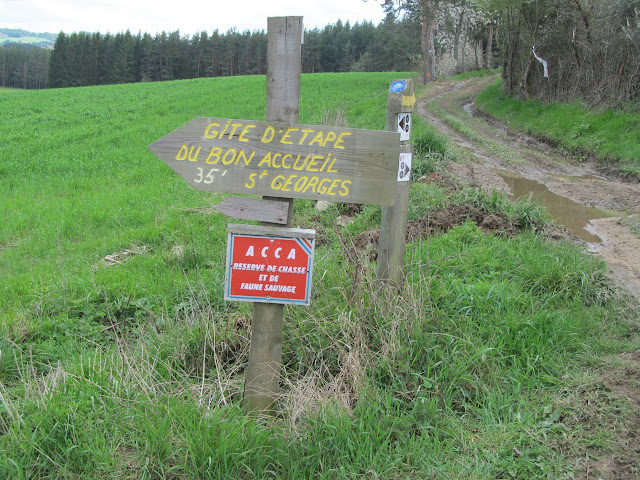 Finally, just after 5pm, I reached the sign indicating the turn-off for the gîte at St-Georges-Lagricol. The sign told me 35 minutes- but there wasn't a chance of that at this end of the day on these tired legs, and it was nearly 6pm before I arrived at the doors of the gîte! Still, I was pleased with how my clever feet had managed this day after the rest day for my large 'ampoule'.

There wasn't anyone home when I first arrived at the gîte. I'd been told where to find the key: I hadn't understood all the words on the phone, but I'd written them all down, and the mystery was easily solved in situ. The building was comfortable, and the showers welcomingly hot, but it seemed a bit 'institutional' as if it were an old hospital that I was rattling around in all on my own. However, once the family arrived home I ended up having a long chat with a very friendly owner. He told me that my French and Dutch companions had arrived feeling very tired and wet the day before- while I had been still safe inside in the mountains. He also told me they both slept late, and it had been 9am before they were ready to leave the next morning! He also told me that my French friends were booked to stay the next night with their group of five. He said that most nights he did have one or two pelerins to stay, so people were definitely walking the route, but we tended not to see one another. (I'd been told something similar at Gros Bros in the early days of the trek.) He had some reassuring news that I didn't need to retrace my steps as there was a marked route back to the chemin in the morning; that the bar and epicerie would both be open early; and it was indeed a shorter day tomorrow, with 22km to St Paulien.

I enjoyed hearing the sounds of children running around upstairs, and slept well after my long day...
Posted by Kiwi Nomad at 17:31