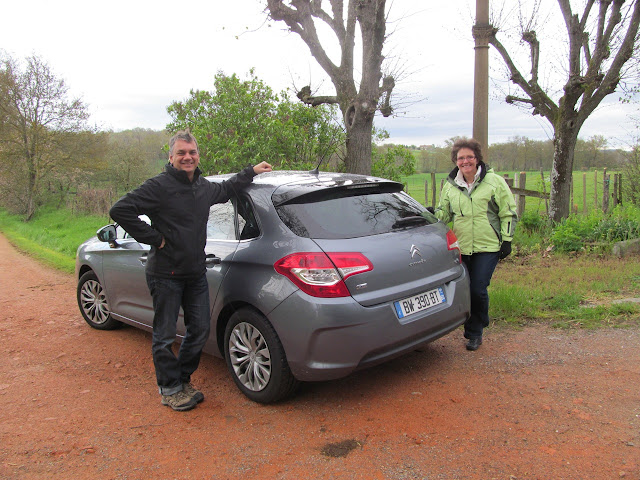 Lyne, Denis and I had breakfast in the gîte, then packed up ready for departure. I took one step outside the door before re-entering to put on every layer of clothing I had: it was a bitterly cold morning. (Francis, who only ever saw me walk in shorts and jersey, would have been hugely impressed!) Then L&D took me in their rental car back to where I had left the Chemin the previous afternoon. I waved them goodbye, -with their suitcases and car transport and many choices of clothes, and their car heater!- and headed off alone along my pretty forest path. 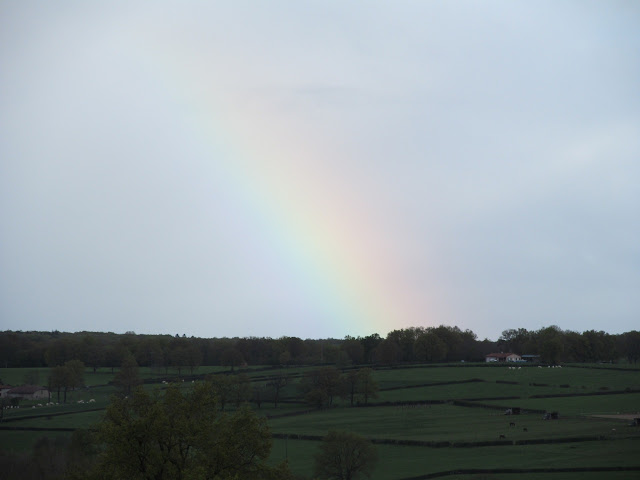 Despite the cold, it was easy walking along a flat path through lovely valley countryside, and the path wasn't even very muddy. I hadn't been walking long when I saw a beautiful rainbow in the sky, that somehow seemed to 'atone' for the cold I was enduring! 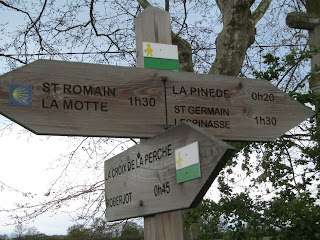 I made it to St Romain La Motte in time for lunch, and enjoyed a very good meal there with friendly service. 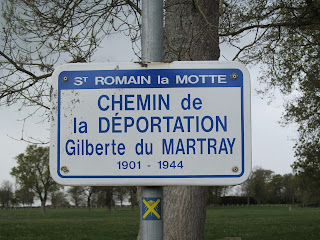 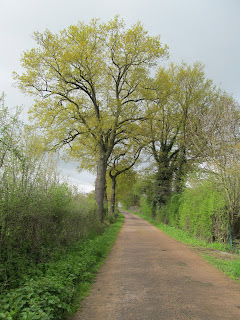 The history of this area was clear in some of the road names. The loss was clearly mourned of some who had been deported off to death during WW2. 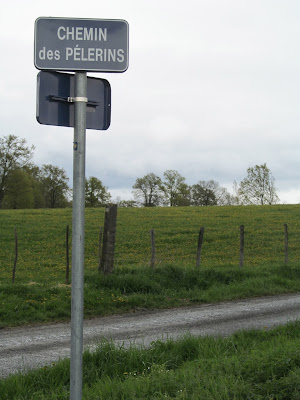 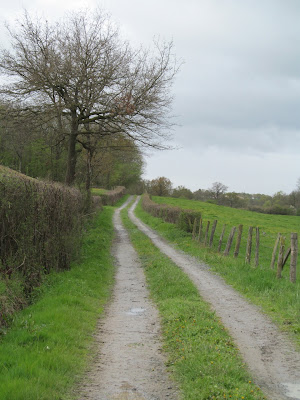 And although this route didn't have a whole heap of pilgrims along it during these modern days, we were 'remembered' in its name. 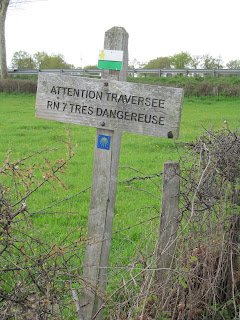 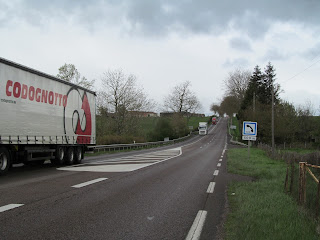 There was a very busy national highway to cross during the morning, but I didn't really mind, as it meant the route wasn't quite so solitary. 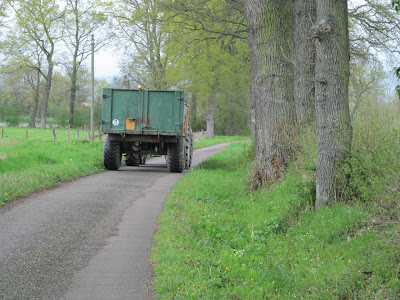 Once safely across the highway, it was back to a more sedate pace of traffic on the route. You can see how flat much of today's route was- across river floodplains basically, like near the Manawatu River at home. 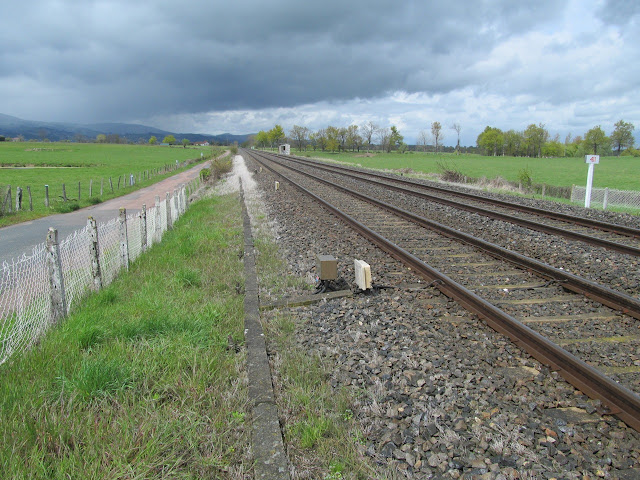 There was a bit of a diversion alongside railway tracks to a 'safe' crossing point. I always had an urge to jump on a train for a wee break from walking whenever I passed railway lines! 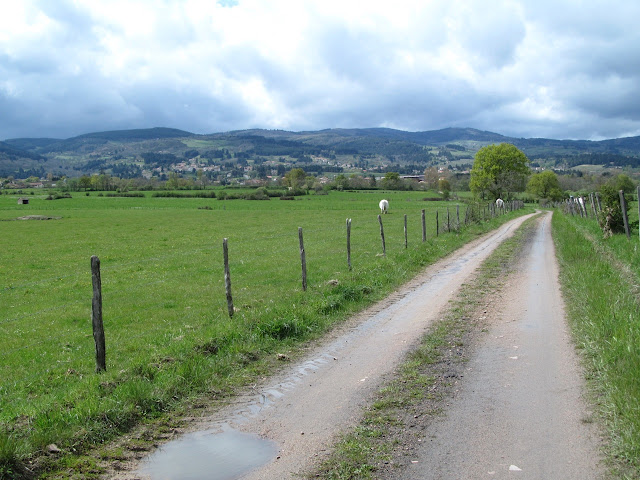 More flat countryside- but you can see the hills up ahead. They were to keep me busy the following morning, walking along between towns and villages all perched on the hillsides. 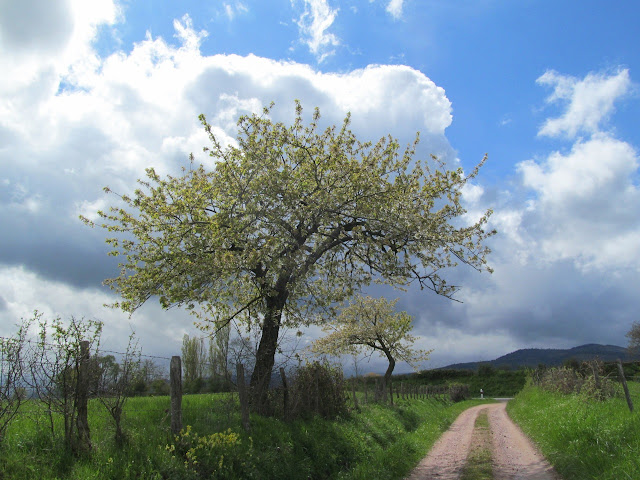 There were some lovely blossom trees again. Although the rain threatened, I didn't need quite so many layers of clothing as the afternoon progressed. 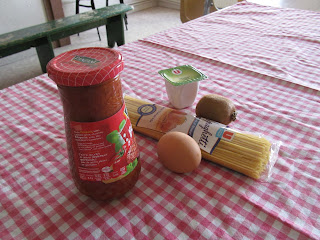 Finally about 3.30pm I arrived in St-Haon-le-Châtel, a beautiful small town. I was expecting a bit of a climb up to the town at the end, but it wasn't too long or hard. I couldn't see the gîte immediately but found an info centre open. The friendly woman in there switched to English for me, and rang the gîte owner to get me organised. I think I was probably a bit lucky to stay here, as more usually bookings were only taken for groups. But the other six pilgrims I had met had stayed here the night before as it turned out, and had talked about me. Preparing the way!

The gîte owner was a lovely young farmer, and she had realised I would be surprised by the fact there was a mid-week 'closed' day in the local shops. So she had brought along some pasta from her own pantry so I had some food to cook. She also added a kiwifruit in honour of my nationality! It turned out this lovely woman had even come searching in her car along the chemin routes for me during the day since it was so cold, and was going to offer to carry my pack for me to make life a little easier in the cold weather. But she couldn't find me... 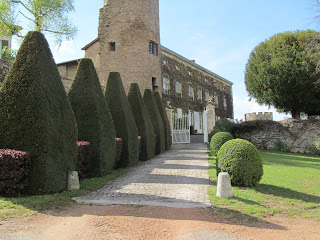 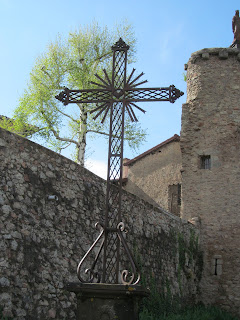 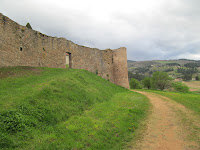 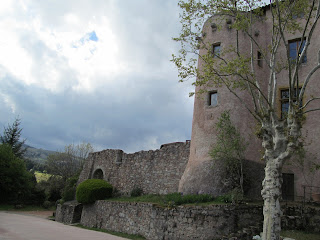 Once I had showered and done my laundry, I headed out to explore the town a bit. There were medieval walls and many old buildings to see. And even if it is bitterly cold, you can't 'stay home' and not explore when these kind of 13th and 14th century walls are still standing. 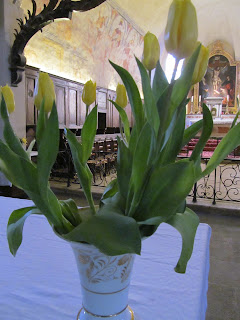 The local church was an interesting mix of styles from across the centuries, some parts dating back to the 12th century. Typically, I was seduced by the flowers in a vase!

As evening came, I locked myself into the gîte where I was spending the night all by myself. It was a very comfortable gîte, but this was actually what I found the hardest about the Cluny route- the solitary nature of so much of the walking and quite a few of the evenings. When I'd walked with Francis he had taken my hand on my walking pole at one stage, and said to me that Jesus would be walking with me each day. Somehow when the rainbow had crossed the sky this morning, I'd been very mindful of this. But I still found the evening loneliness quite hard...