I'd already looked at the contour lines on the map, and I had been warned by someone who had walked it, that the climb to Cenves was long and difficult.... so I made sure I ate a hearty breakfast! By 8am Francis and I were setting off for the day's exertions, and it wasn't long before we were climbing. The gradient was a bit less severe than I was expecting- but I was surprised by how muddy some of the track was. 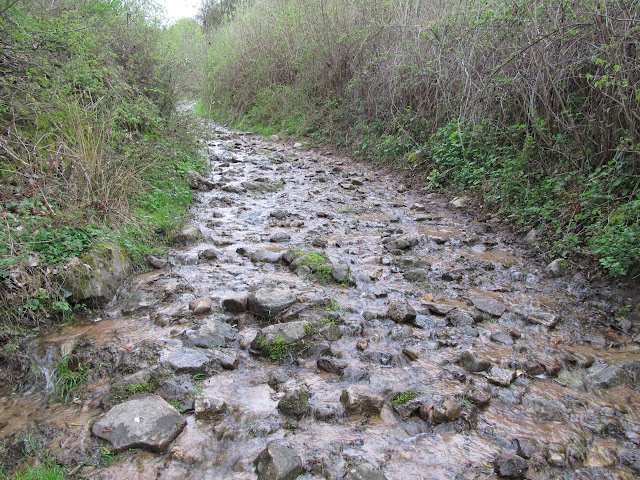 Here's the worst of the muddy section through farmland. A friend who saw this photo thought it was a stream rather than the track... It was quite hard work walking up this track, but somewhere through the years, I've learned to just keep plodding on steadily upwards. 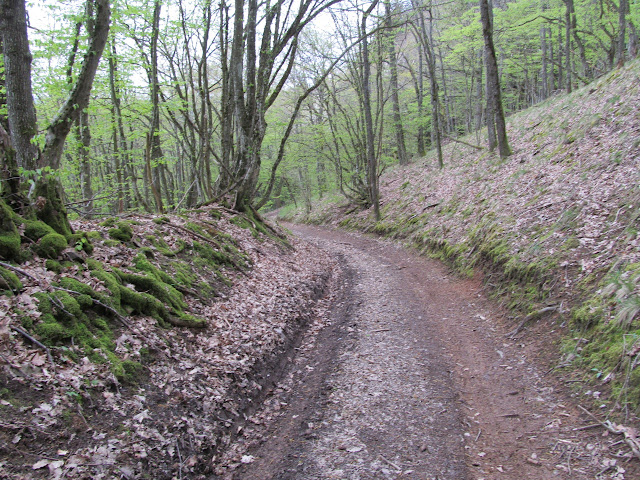 As on the previous day, this morning there were some lovely sections of forest with spring leaves just emerging, and as you can see, the track is less muddy here. (Can you hear my sigh of relief?) 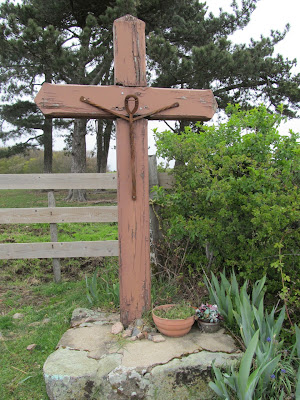 In this region of France it is quite common to see crosses in the landscape. They were of many sizes and kinds, and were there for different reasons. Some had been erected after a 'Mission' had been preached, while others were memorials for someone who had died.

Once we had reached the top of the climb, we were at an altitude of around 700m, and the grass growth was sparse. This was hill country that reminded me of home, with sheep in the fields. 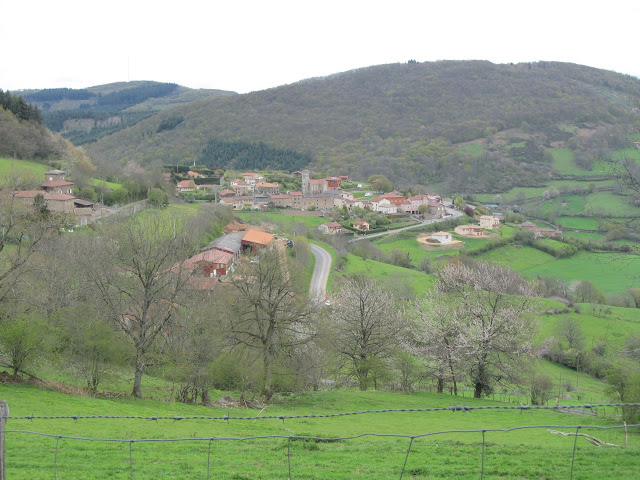 The climb to Cenves was about 5.5km, and once we'd arrived we had a short rest break there on the steps of the large gite. Francis told me that after Cenves the track was 'facile' (easy) and 'plat' (flat) but I was to quickly learn that we had different definitions of the same words! This photo was taken on the climb out of Cenves- where we were afforded yet another beautiful view.

It was another 6km to reach St-Jacques-des-Arrets, the village with a church that had interior walls covered with religious art by the painter Jean Fusaro. The works were full of interesting and thought provoking details- but the overall mood as Francis said was a little 'triste'. We found a rest spot for lunch on a roadside seat just past the village, and amazingly the sunshine came out and gave us a little warmth as we ate.

After four more kilometres we reached Ouroux. (I was quite tired by this stage, and it felt like much more than 4km!) Another climb before we entered the town took us to a great viewpoint over the historic church, and we descended on a path that took us straight to a courtyard in front of it. It was one of those paths that made you think of all the pilgrims that had walked before in past centuries, especially since we crossed an old stone bridge over a stream to arrive at the church.

Francis had by now taught me how to recognise the tower design with window shapes that indicated the church had been allied with Cluny. 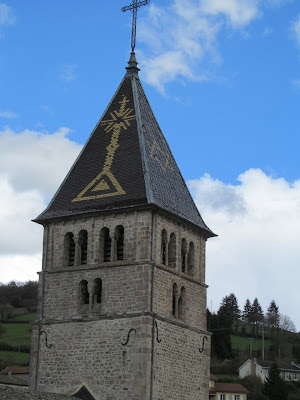 And additionally, this tower had a beautiful design in the tiles of the roof.

From Ouroux you could see a bit of the chateau of Gros Bois that we were heading for. It was only one and a half kilometres away, but there was 100m of ascent. I was tired, but it was time to bring out that last bit of perseverance.... It started drizzling on our way uphill and we arrived at the gates of the Chateau just in time to avoid a torrential downpour and thunderstorm! 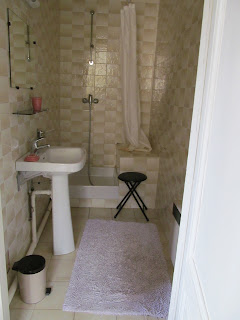 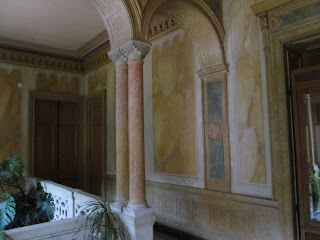 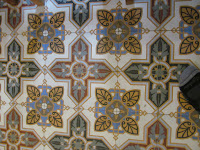 I was to be the 'queen' of the chateau for the night- and my accommodation was a definite 'step up' from my normal...  I enjoyed the unaccustomed luxury of my own bathroom, and loved noticing beautiful details in the building. I was having 'demi-pension' and enjoyed the great meal I shared with the Monsieur and his partner. 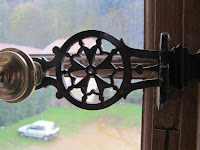 And this was also where I had to farewell Francis. I'd been blessed to have his company on the first two days of this walk, and was sad to have to say 'goodbye'.

Francis had warned me about the more 'solitary' nature of this Camino, and I was steeling myself for the more lonely days ahead. But remarkably, there was a German couple staying in the gite part of this chateau, and I was to end up crossing paths with them for a few days.  The owner of the chateau told me that most days he had one or two pilgrims to stay- he seldom had nobody staying during the season- but we pilgrims seldom met each other.
Posted by Kiwi Nomad at 18:04