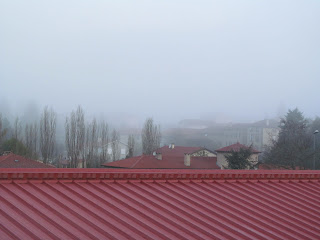 You'd think I would have woken in a really good frame of mind, knowing it was my last day of walking to reach Le-Puy-en-Velay. But there was something about opening the windows to find fog, and the institutional building I had slept in, that had put me in the kind of morning mood where I couldn't wait to leave St-Paulien as soon as possible! 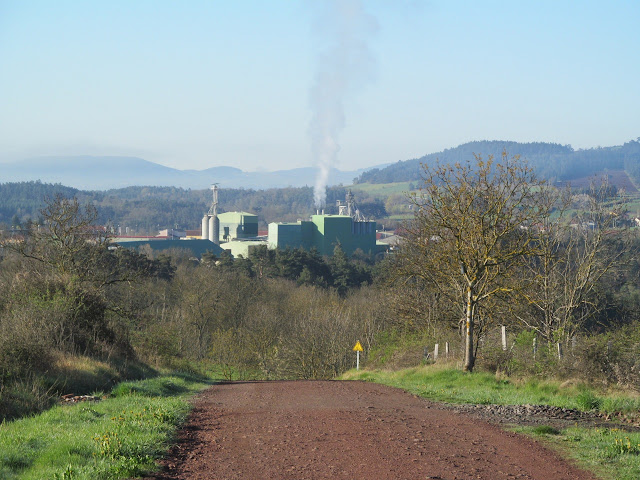 Somehow it seemed perfectly fitting that I should then discover that close to St-Paulien on my exit route was this large factory belching smoke into the atmosphere. I had walked in such sparsely populated rural places for such a long way that I had quite forgotten about factories and industry... 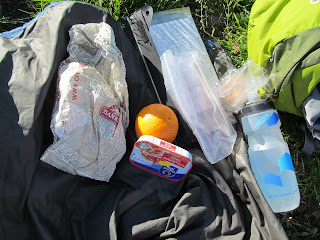 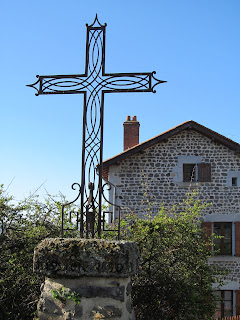 However, once I had left the factory behind, I was soon back in the countryside, and the skies were blue again. I chose a roadside spot to sit down and eat my 'breakfast'. It was sardines this time: I had had quite enough of tinned pâte! 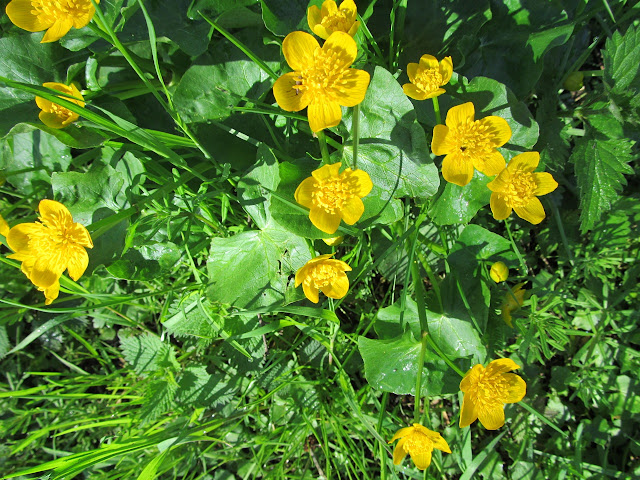 Even though I felt like there had been some big descents yesterday, in fact I was still at quite an altitude, as these alpine buttercups show.  (St-Paulien was still at 810m altitude.) 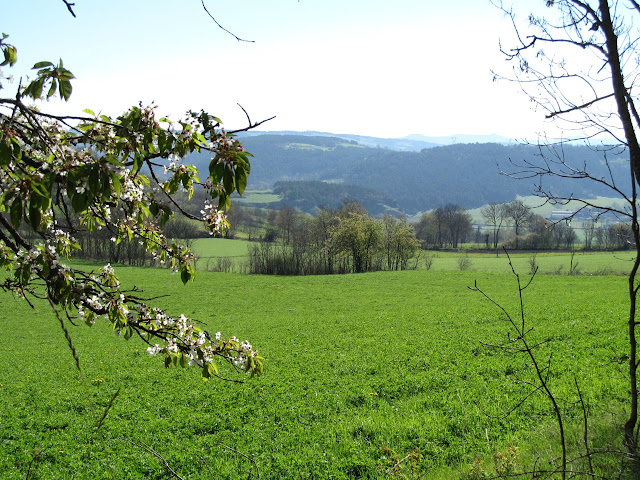 The countryside was lovely, and reminded me of home. 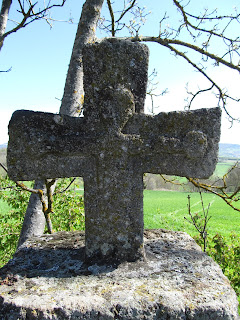 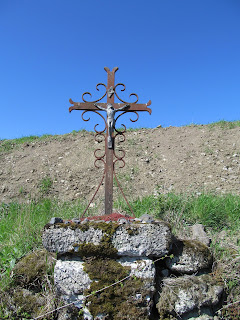 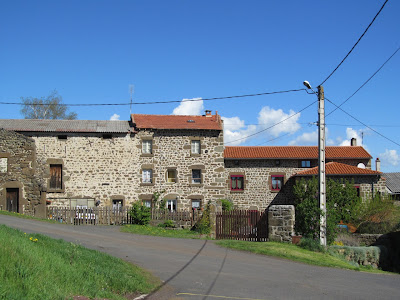 There were several small hamlets to pass through. Signs of piety abounded with many crosses, some of them quite old, and many buildings showed the volcanic origins of the area in their stone work. 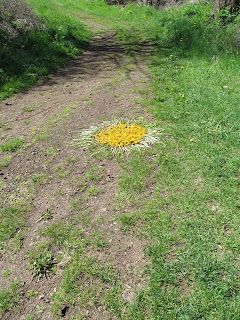 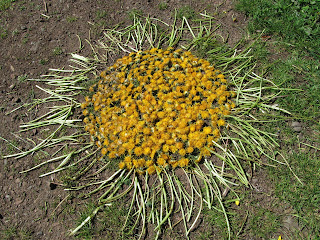 As I neared the larger town of Polignac, I saw this flower creation on the ground, made of dandelions. No doubt someone had placed this here on May 1st. 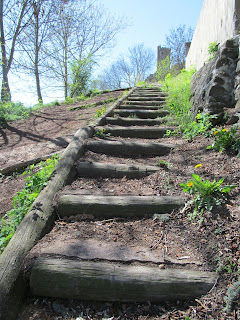 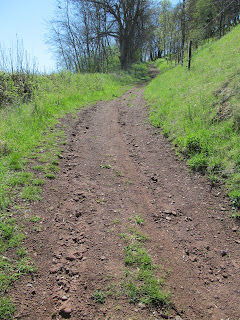 You'd think I would have learned not to put too much faith in the very approximate altitude sketches in the Amis guide by now, but the climb to Polignac came as quite a shock, as it was so steep. However, you just gotta keep on plodding upwards sometimes... 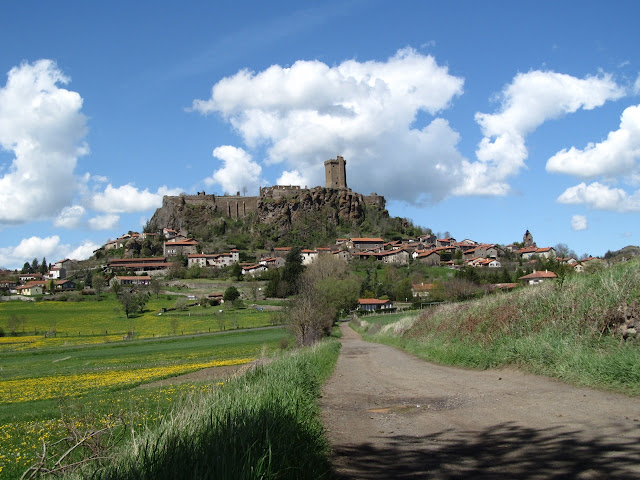 Polignac was indeed quite spectacular, from every direction. 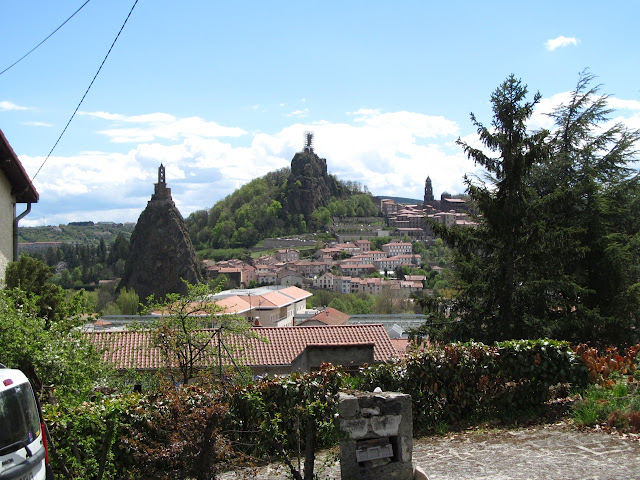 There was yet another long climb to surprise me, before I could enter Le Puy. The Chemin took a hillside climb, then descended again to enter the city. 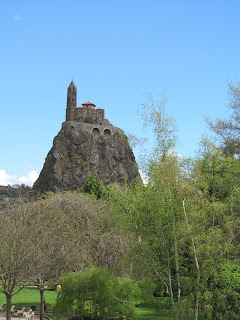 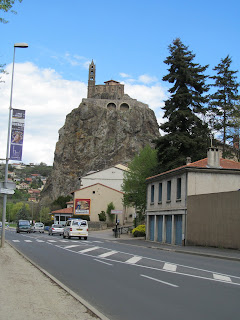 And it was on this final part of the journey between Cluny and Le Puy that I got lost! I took a wrong turn somewhere on the descent. I found my way again, but then couldn't work out where I should go to head uphill in the direction of the Cathedral. I felt exhausted as well as lost, so close by the chapel of St Michael at Aiguilhe, I had a 'meltdown'! 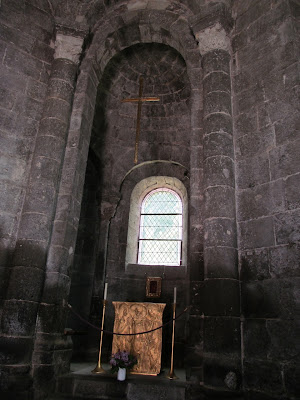 I went into this historic little chapel nearby, and let all the tears out. I think partly there was 'relief' involved as well: I'd had to be so strong to walk the Cluny route by myself, and suddenly I wasn't so alone... Fortunately no tourist came in while I was bawling away- and the first person who did come in was a pilgrim himself, who had just spent five weeks walking on a more isolated route, so he understood entirely. He also knew which street I needed to take to reach the Cathedral, and was able to point it out to me. (I wrote more about the 'meltdown' at the time: I'll put the original blog posts up next.) 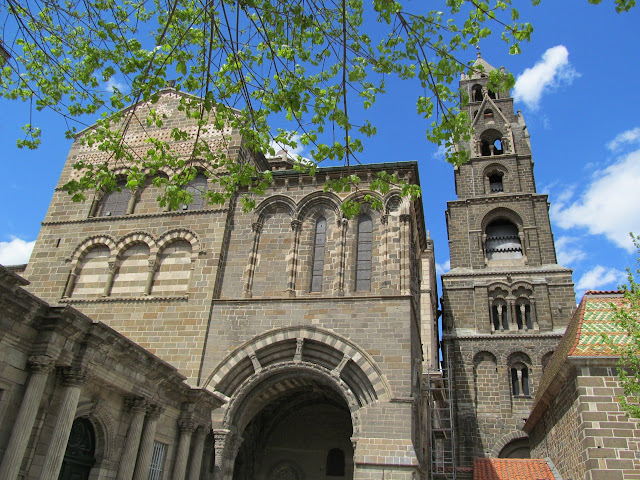 Once at the Cathedral, I found a map and sat down to orientate myself to find the gîte, which I knew was opening at 3pm. The spring leaves looked beautiful near the Cathedral, and I managed to calm myself down somewhat. 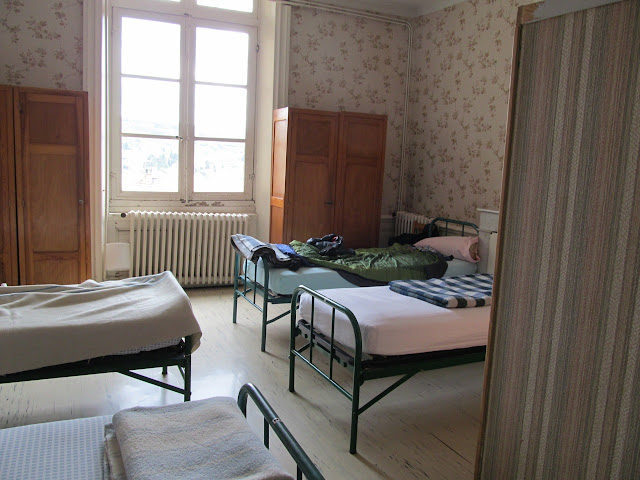 I'd booked into the Accueil Pèlerin St Jacques that Francis had suggested, and their welcome was very warm indeed. And since I had already walked so far, and was in need of a rest day, I was allowed to stay a second night. I was glad about this, especially since I knew my friends were going to be arriving here the next day.

Next morning I found an internet café, and was able to tell people I had indeed reached Le Puy. At the time I wrote:
"I have arrived in Le Puy. The Cluny route is indeed a beautiful one, but not many pelerins on it, and I found the loneliness hard at times. I have a few other blog posts done but so far havent seen a cafe with wifi.
I am back in the land of many pelerins, and the first gite I rang was complet for tomorrow!!!It is lovely and sunny here in Le Puy today and am about to go climb the Rock with St Michaels chapel on top. In a few hours my French friends are arriving from doing the last third of the Cluny route, including Francis who walked with me the first two days. Am really looking forward to seeing them!"
Posted by Kiwi Nomad at 17:20