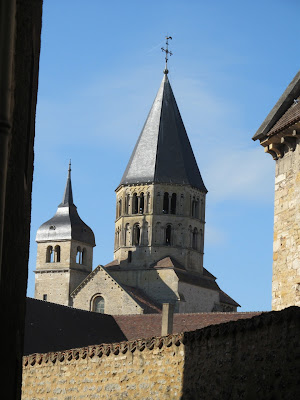 On Tuesday afternoon, April 17th, Francis and I left the Cote d'Or departement for the drive south to Cluny. We passed by much forest, and later, vineyards. We stopped briefly at Taize to say a prayer for someone who was ill, and I was amazed by how much the place had grown since my younger days when I had visited there in the early '80s.

When we reached Cluny we were too late to take a guided tour, but even a walk around the outside of the ruins of the old monastic buildings gave an idea of how immense this monastery had been.

We dined at a restaurant but were home in bed by 9.30pm, ready for the early start we needed next morning.

Next morning (April 18th) we breakfasted in the gite, then donned our packs before a walk to the boulangerie for fresh bread. My pack felt very heavy at this stage, as we had to carry food for several days, and I had extra clothing for the cold, wet weather that seemed likely.

I hadn't read the route guide or map too carefully, so I was a little surprised by the steepness and length of the initial climb out of Cluny. We met two women who seemed to be teachers at the school on the hill, and they guessed we were on the way to Compostelle, and wished us Bon Chemin. Very French, and very much appreciated. 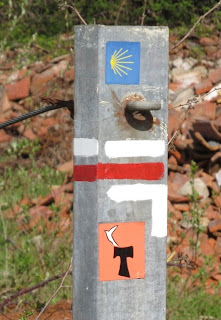 My education began immediately, as Francis took his opportunities to make sure I knew which direction was indicated by the shell balises- in this case a left turn. At this stage we were sharing the route with the GR3, with the red and white markings, but the Chemin diverged from this at several stages along its length. The bottom marking here was a mark for a new route from Vezelay to Assisi that we shared the path with briefly. 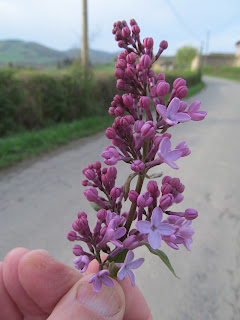 Francis also taught me about some of the flowers that we passed along the way.
After the initial climb out of Cluny, we followed a fairly flat path for the first few kilometres- in places quite muddy after recent rain. This was indeed the last really 'flat' bit of track for quite a few days. 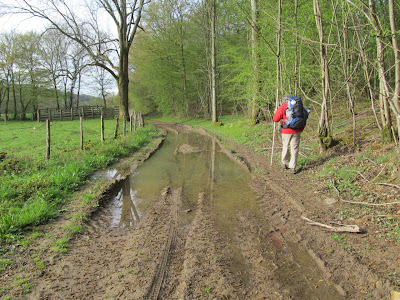 I loved this beginning to the walk as I breathed in all the rural atmosphere, the flowers, animals, birdsong, spring leaves budding forth on the trees... 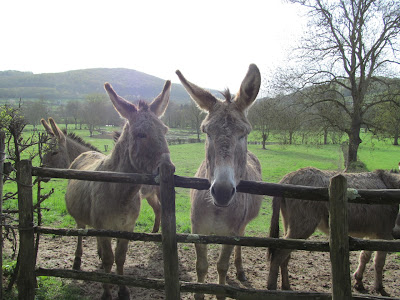 These donkeys soon came up to the fence and loved to be patted on their noses, though they were probably hoping for spare food that we didn't have to give them.

Francis had longer legs than I did and was much fitter than I was, so I got a few photos of him walking ahead... It was about 7km to Sainte-Cecile before the climbing began. I soon came to realise that Francis' definition of a 'slight' climb was different to mine, and we had many spectacular views throughout the day.

We also walked on quite a few sections of forest path, which gave an indication of what lay ahead when I walked on my own in two days' time. 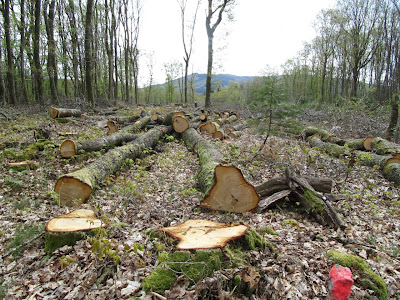 I loved the colours on these felled trunks. 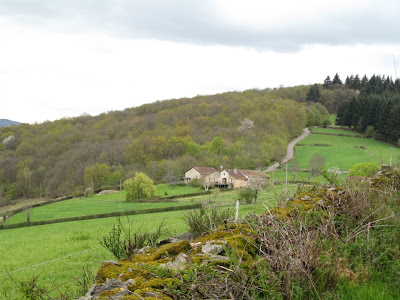 And the spring colours on the forest on the hill ahead of us looked very beautful. And that road that climbs steeply up beside the forest and farm buildings? Well, yes, we climbed up that hill, and when you thought you had reached the top, you would find there was yet another steep climb ahead. (There was certainly a lot of hill climbing to be done this day, and I was grateful for every time I had climbed up the Gorge route or Green's Rd in 'training'.)

But the great thing about climbing is that you get many wonderful views back over forest and farmland. And some of the views across valleys were just spectacular. 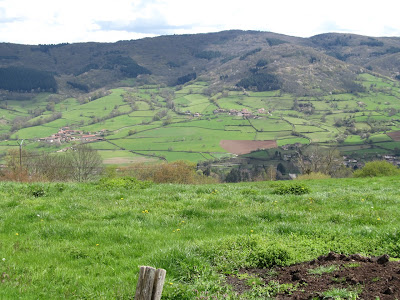 Some of the forest was deciduous, and leaves were budding forth. 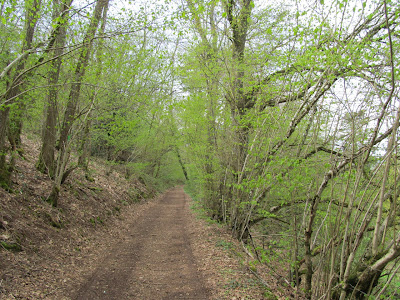 It seemed like a long day. We had made an early start, but it was getting close to 4pm before we saw this view of Tramayes down in the valley in front of us. 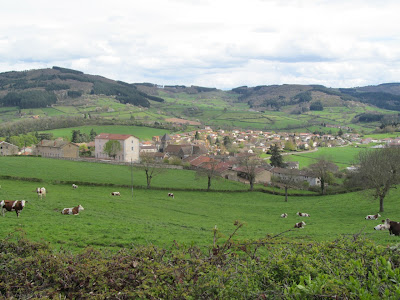 We were instantly welcomed in the town. A couple who had already walked to Santiago spied us as we entered the centre of town, then they took us to the nearby house where we were staying- at an 'accueil jacquaire'- where someone took pilgrims for Santiago into their own homes. 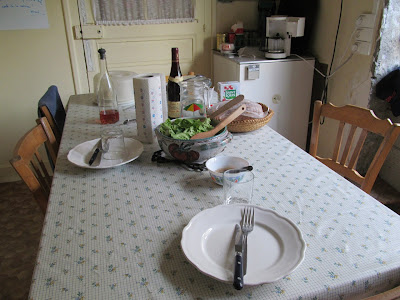 We were made very welcome by Mme Galland, who was allowing us to stay, and who had prepared a meal for us, even though she herself was returning to family in Lyon for the night. 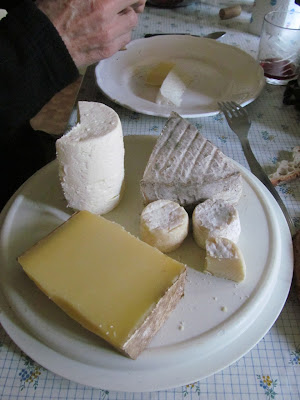 And Francis just loved the selection he could choose from in the cheese course...