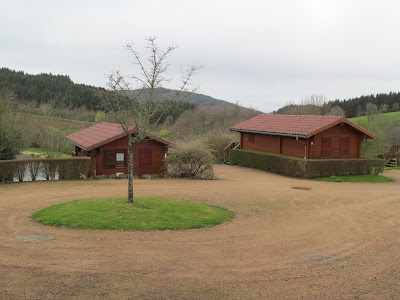 The overnight rain had stopped, and the altitude profile in the Amis guide looked easier than for the day before. I left the Azole camping ground feeling like the day's walk was all 'under control'. I guess I learned a few things today about the 'approximate' nature of the altitude profiles in this guide: there were actually several steep rocky paths to ascend. The day was in fact quite a challenge! 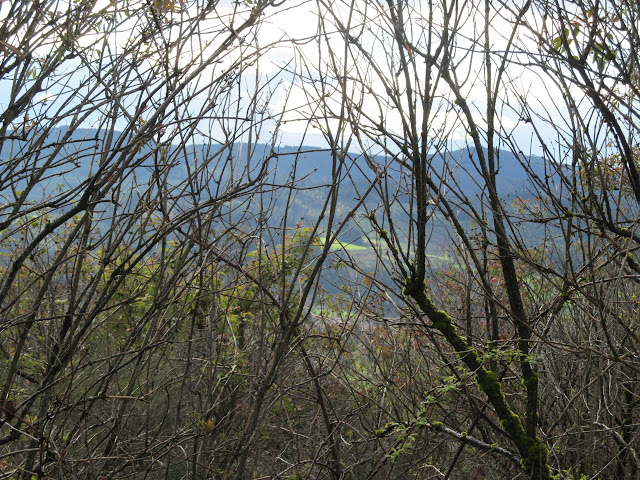 The first couple of kilometres took me to Col des Écharmeaux- which came at a crossroads between routes.  Here I actually became a bit confused about my direction, and where I had come from, and where I had to go. Then the two cheerful Frenchmen I had met the day before both emerged, and put me right- my first angels for the day. 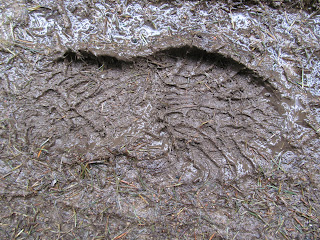 Footprints in the mud were definitely also my friends along this route- they gave some assurance that you were on the right path, when fellow pilgrims were few and far between. 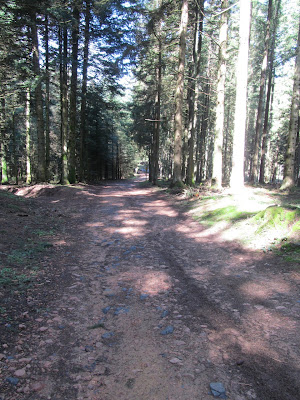 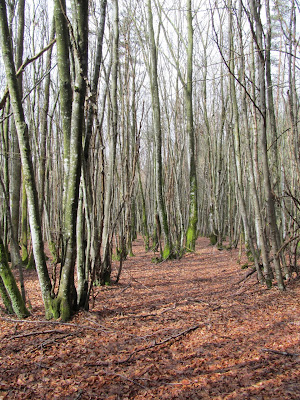 This was another day with forest, much of it was more foreboding and dark, with fewer clearings to see the views. But there were still glimpses of the nearby hills, and moments of sunshine. And the forest type wasn't always the same either... 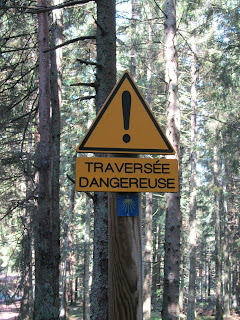 It was 17km of walking today from Les Echarmeaux to Le Cergne, without passing through any villages. So a sign like this, warning of an imminent road crossing, was both necessary and comforting, a reminder that there were indeed other people not so far away. 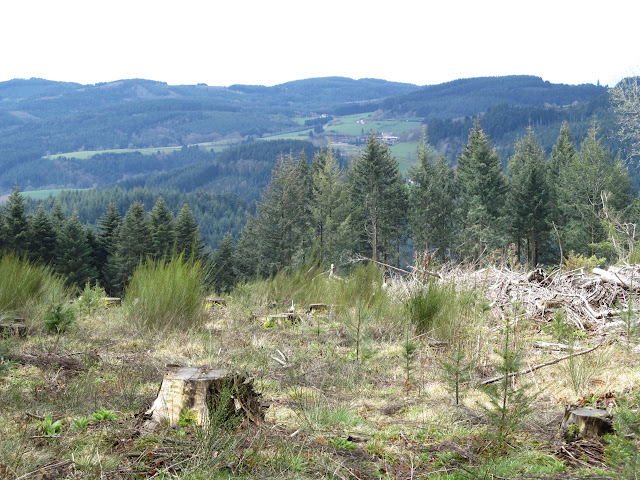 It actually turned out to be a very cold day, and I wore my jacket for quite a while at 700m-800m altitude. I knew my friend Francis would have been surprised to see this, as he had marveled at my attire of shorts and light jersey on the first two days, while he had kept his own warm jacket firmly zipped up.

This was also a day when I had some unexpected good company- an older French couple, the two Frenchmen, and the German couple- six other pilgrims in all. I started to feel that there would indeed be plenty of other company along the route. But soon I was to take a shorter day than the others, and my walk became much more solitary until I was nearer to Le Puy. 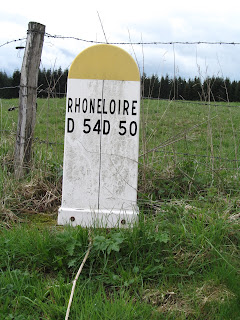 Moving on.... I always enjoyed seeing signs that indicated the change of 'departement' or region, as it confirmed 'you're moving on'. 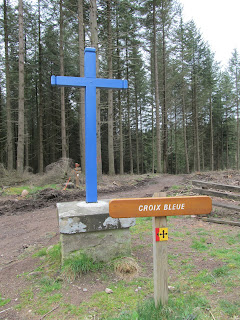 This blue cross is one that I had seen in several albums online before I walked. Today I came to understand why everyone takes photos of it: there is a lot of forest, and not a lot else to take photos of during this part of the walk. 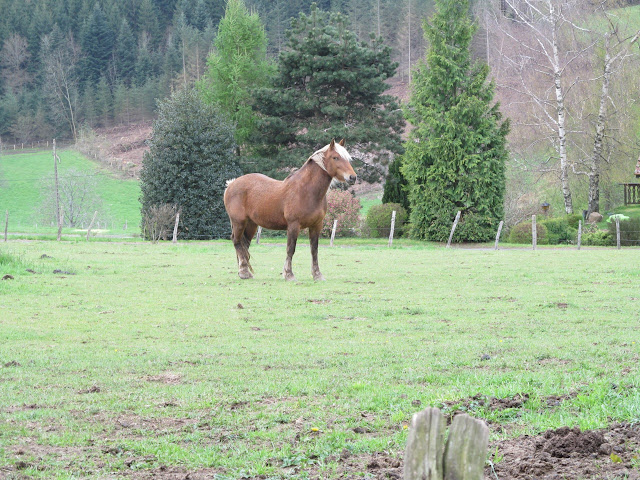 As I neared Le Cergne, the rain began to fall quite heavily, (and my camera had to be buried in my pack.) I began to be concerned as I didn't really know how to get to the gite I was staying in for the night. I knew it was a few kilometres off the Chemin, and it was a place that Francis had recommended. He told me that the owner of the gite might pick me up from the Chemin and take me to her place. But my French had been severely challenged during the phone conversation I'd had with her, and I only understood the words 'coiffure' and 'quinze heures'- so I thought I had to get to a hairdresser's in Le Cergne before 3pm.

Before the descent to Le Cergne began, there was a chapel to Our Lady of Fatima. It was closed, but I decided I needed to have a serious talk to Our Lady as I passed by, telling her I was cold and wet, and needed a bit of intercession to get my night's accommodation sorted.

And in the event, all was well. I felt like a completely drowned rat when I arrived in the town, but then I saw a hair salon, open beyond its normal Saturday hours. I walked in, and they instantly made this bedraggled foreigner welcome. This wasn't the 'coiffure' I was supposed to find, but they rang the gite owner, and got me all organised. The man who was the customer in the hair salon even drove me to the gite in Cuinzier, which was 5km away. I met quite a bit of kindness along the Cluny Chemin, and this was one of those instances. You remember this kind of kindness for a lifetime. 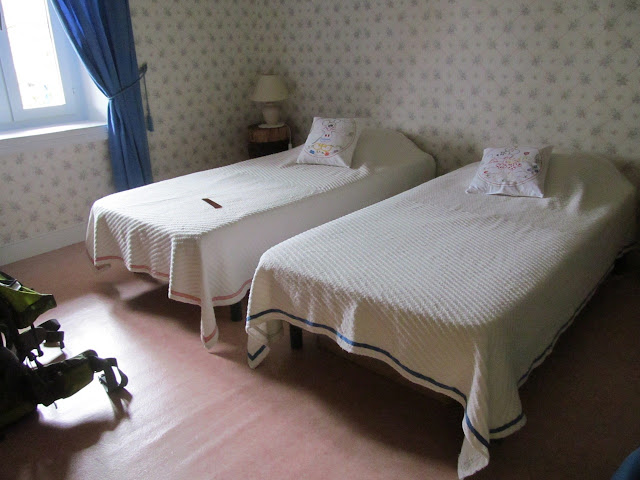 This was my comfortable bedroom in the gite. I had a hot shower, and soon felt much better!
Eventually the rain stopped, and the sunshine even came out, so I was able to take a short wander in the small town of Cuinzier. Spring flowers brightened up the street. 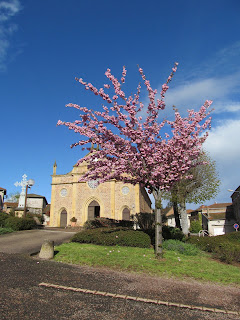 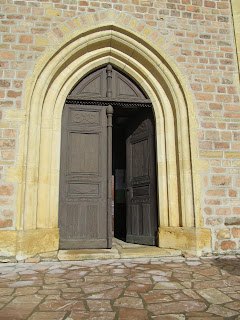 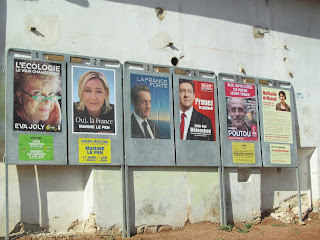 There were election hoardings for the first round of the Presidential election in the main street as well. These were the same as I had seen elsewhere. There are laws in France that 'standardise' such posters. 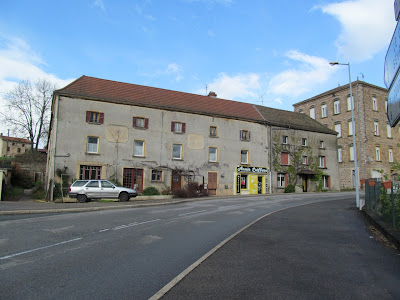 And the mystery of the 'coiffure' was solved: the coiffure was in the same building as the gite in the town of Cuinzier- it hadn't been 'quinze heures' I'd heard after all.


And I had a lovely evening. My hostess, Mme Destre, cooked a delicious meal- and face to face I was able to converse with her quite well in French. Talking on the phone is always harder: face to face, someone can see if you don't understand, and words can be spoken more slowly or rephrased. She even rang ahead to book accommodation for my next evening. And the next morning, I signed my name on a large tablecloth she had with the names of all the pilgrims who had passed through and stayed in her home...
Posted by Kiwi Nomad at 18:01