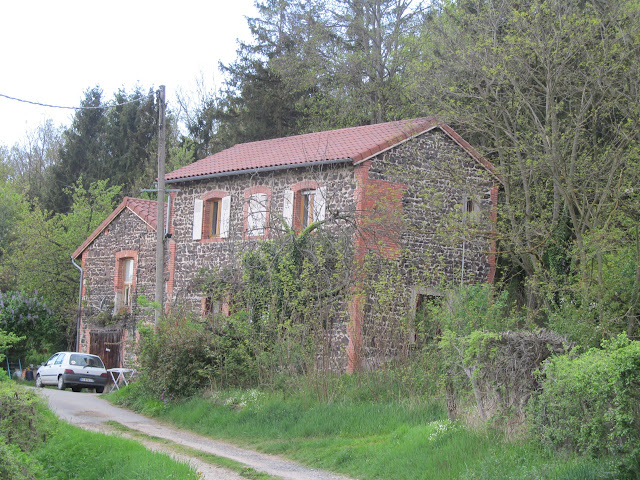 It was an interesting rural walk, past some houses that had granite in their construction: I was truly in an old volcanic area now. 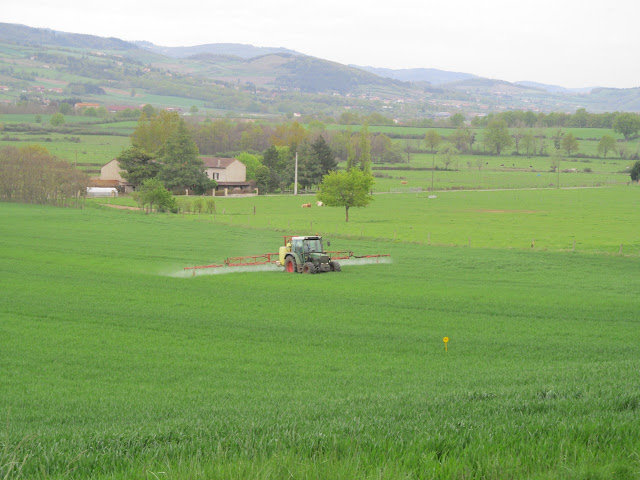 And again, there were many crops being cultivated in this area. 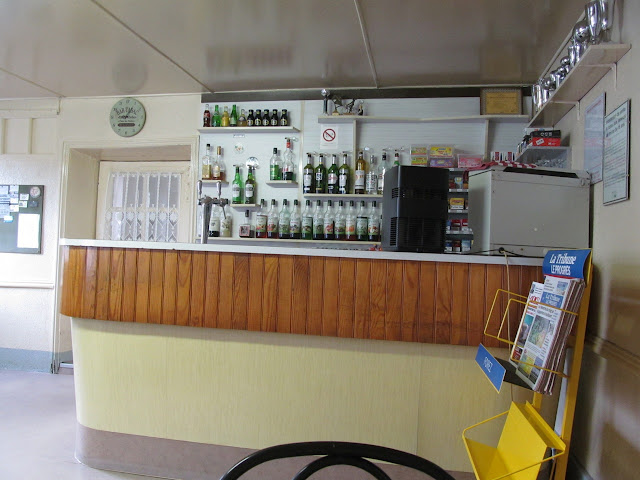 I made good time to the first village, Chalain d'Uzore, where I had a delicious hot chocolate in this local bar. The next town was Champdieu, which was chokka full of interesting medieval buildings. 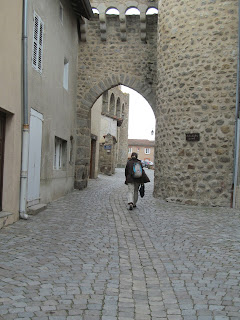 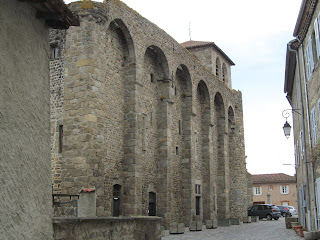 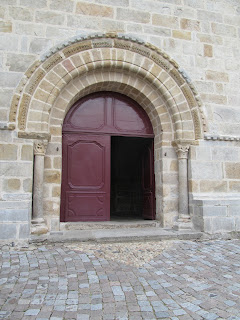 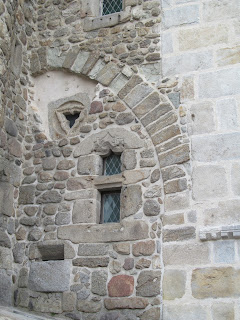 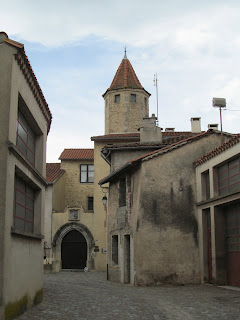 By this stage though, my tender feet from yesterday were announcing their discomfort, and I stopped on a roadside seat at the end of Champdieu to examine them. I had become quite good at avoiding blisters after my first Camino experience, so I was surprised to find I had developed a blister under my left foot near the toe- too much hard tarmac walking... I applied a blister plaster. And under my right foot where there were some hot spots, I used some of the rest of the precious hiker's wool my friend Trish had given me. At the end of the day, I had no further problem where these hotspots had been, and I wished I had taken the full bag Trish had given me: I only had a little wool left and needed to ration it carefully. 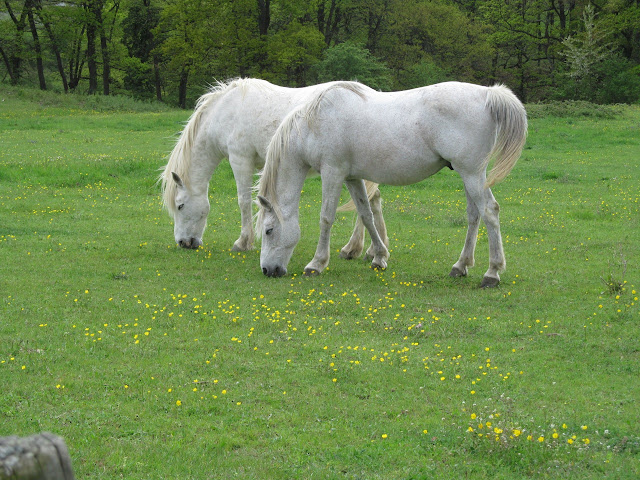 I should really have stopped in Montbrison to rest my developing blister, and on the Camino Frances I would have, but on the Cluny route, accommodation wasn't so frequent, and you couldn't always just simply turn up on a doorstep. There were several 'accueil jacquaires' in Montbrison, but you are really supposed to organise them beforehand. I guess I could have rung and told them I had an 'ampoule', but sometimes when I had to speak in French I wasn't quite so confident. 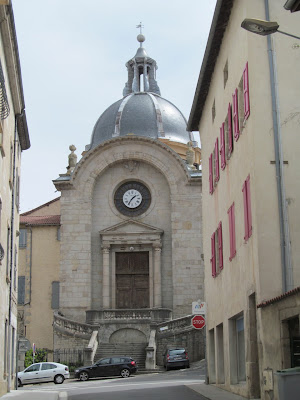 Montbrison had interesting buildings in its centre as well, but I still had another nine km to walk to the gite I had reserved in, so I just had a 'quick look' at them. Most shops were closed by the time I reached the city, but I found a crepe restaurant where I had a delicious salmon salad, and managed to find a shop where I could buy supplies for dinner. 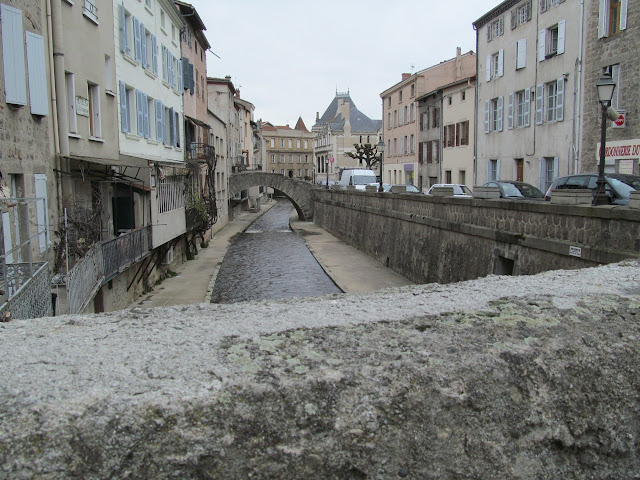 It's funny how when you walk a long, mostly rural path, you become a bit 'fearful' of finding your way through cities, which can seem quite overwhelming. But the route through the centre of Montbrison was very clearly marked. 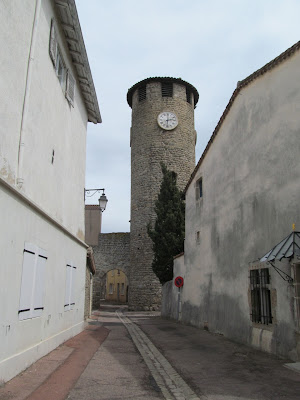 The adjoining town of Moingt also had interesting medieval buildings.

This next 9km section loomed large and hard in my mind. There was quite a lot of road walking out of the city on my tender feet, and the wind became even stronger. There were some lovely rural sections once I had left the city, but it was hard to walk against the wind, and even with my pack on, I felt like I might get blown over! But I just had to don my 'courage' at this point, and carry on. 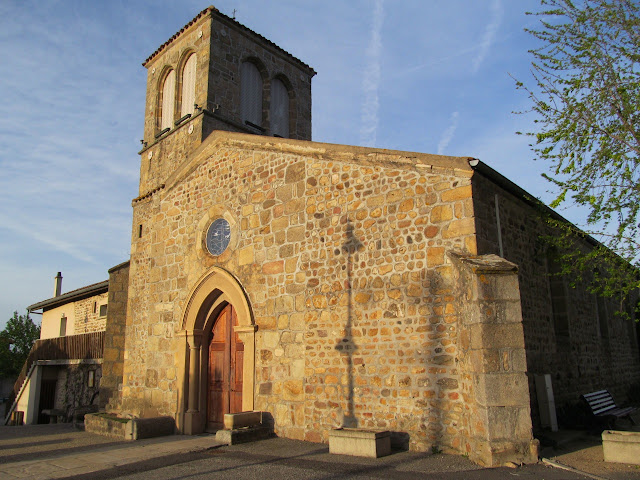 Eventually, by 4.30pm, the town of St-Georges-Haute-Ville was looming ahead. I arrived at the tourist office and rang the number I had been given for the gîte. Soon a lovely kind lady, Brigitte, arrived. The gîte was in a room nestled at the back of the church. Mostly it was used for church meetings, but there were fold down beds, and I soon had myself installed on one of those. Later Brigitte came back to see how I was getting on, and she brought another local woman. When she realised I had blisters, she went home and got me some disinfectant and dressings so I could care for it. The women told me I could stay another night if I wanted to rest the blister, but I wanted to plough on, as there was a sizeable mountain climb ahead the next day, and I just wanted to feel like I had reached the 'top'. 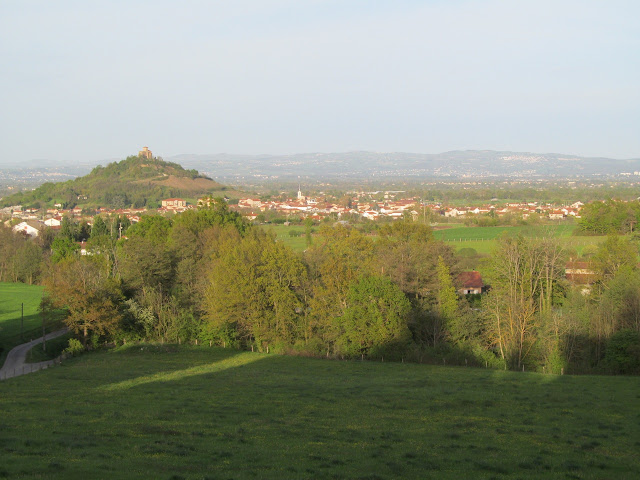 I could see the next little cone ahead, and sure enough, that was where I was headed the next morning! I slept soundly in my little gîte, nestled in behind the church, and had no idea that the area was being buffeted overnight by a damaging storm!
Posted by Kiwi Nomad at 17:38