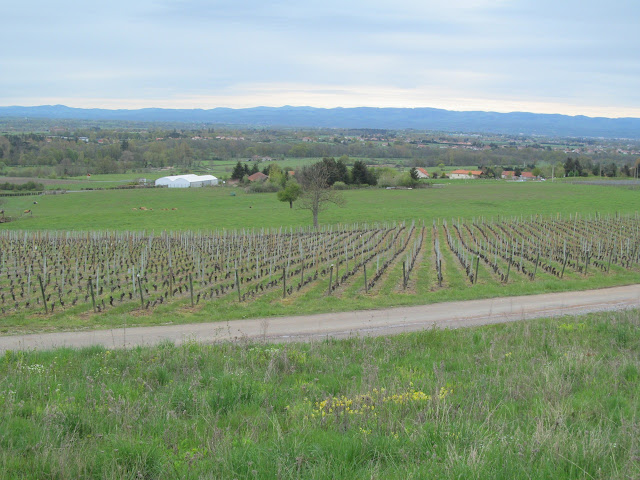 The morning started off with some expected smallish ups and downs along hillsides between towns and villages, and there were even vineyards to see. 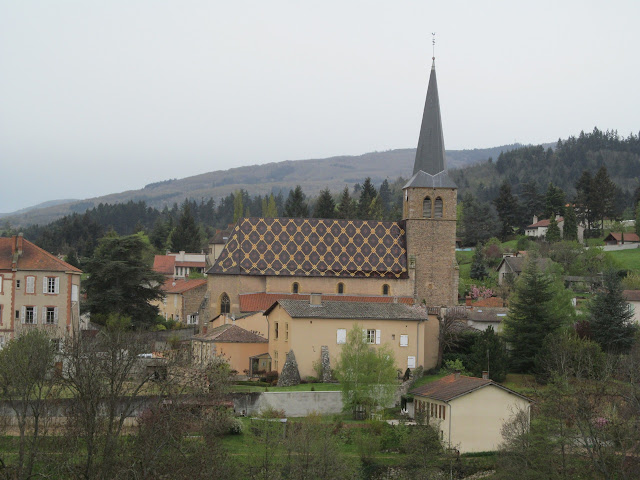 I managed to get a little lost at the entry to St André d'Apchon. It turned very cold again just before I arrived there, and I had to don more clothes by the roadside. However, the town's church was quite distinctive from a distance, and I knew the chemin would go past it; so I aimed for it, and sure enough found the balises again. 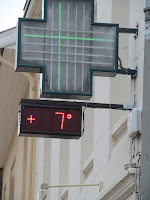 I stopped in the town to put on another layer of clothing, and enjoyed the fact that shops were open so I could buy some 'comfort food' for the cold- chocolate, clementines, pain au raisin. And everyone today seemed to wish me 'Bon Courage!' - I thought at the time they said it because of the cold, but it may also have been that they knew about the winds expected during the afternoon. 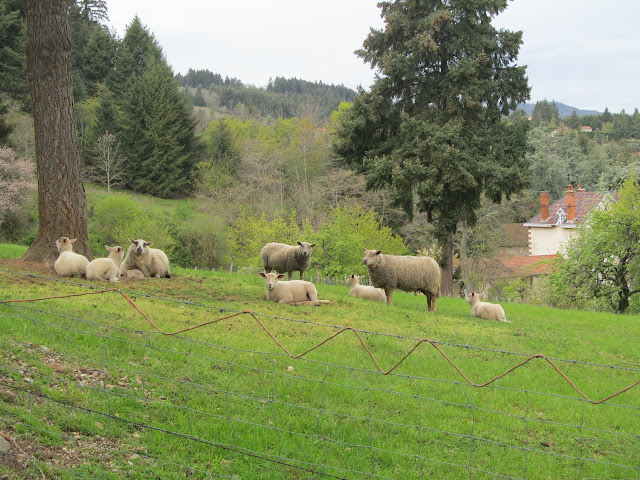 The sign pointing directly to the next town, St-Alban-les-Eaux, indicated 2km. But, this Cluny chemin was a firm advocate of the 'abc' philosophy- ie 'another b*** climb'. And instead of a simple transition between towns, the chemin turned off and headed uphill along a series of steep farm tracks and through forest- but the countryside was indeed again beautiful. And there even some lambs to spy. 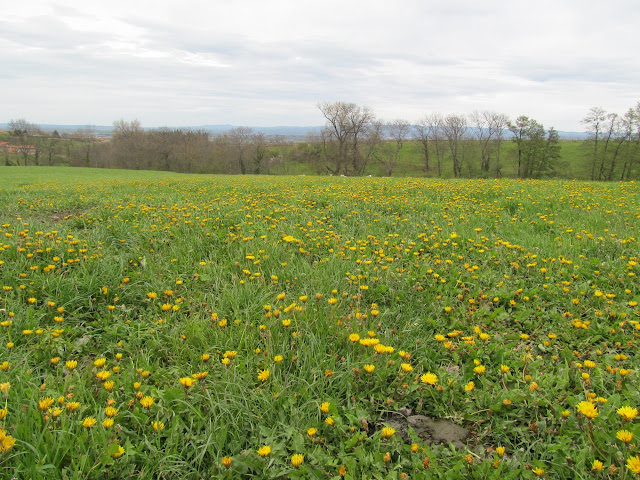 Once back on the flat, there were many fields full of dandelions. I suspected this had something to do with milk production for local cheeses, and someone told me later that that was indeed so. 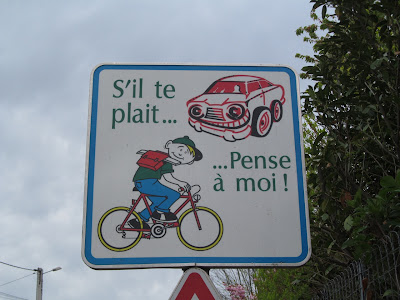 I passed this sign on the way into Lentigny. There were many varied signs along the way aimed at child safety.  I arrived in Lentigny in time for lunch, but I would have to say it was easily the worst meal I had in France. Still, it was fuel for the walking legs that I needed. 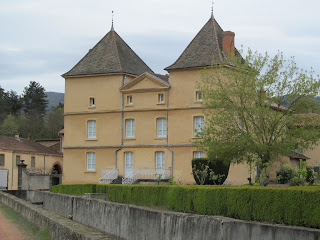 The meal experience was so bad I couldn't leave Lentigny quickly enough. I knew it was only 6km before I reached my destination for the day, St-Jean-St-Maurice, and I thought it was going to be a 'doddle'. But the weather had other plans.

The first section of the walk was relatively sheltered, down to a chateau, then passing by the edge of some forest. 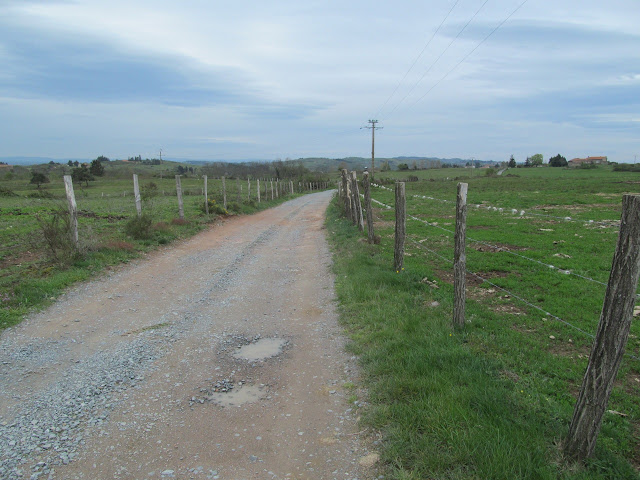 But after that, the wind came up, and my last few kilometres for the day were into a very strong head wind. The countryside was very bleak looking, though it was an area where horses were farmed. It is surprising how you can come to relish such bleakness though, even though it did seem to take 'forever' to traverse the distance in the windy conditions. 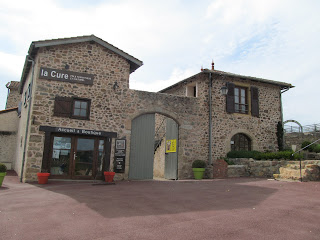 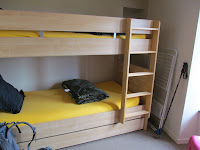 In St-Jean-St-Maurice there was just a little gîte with four beds in it- quite beautiful. There was a kitchen/dining area downstairs, though as it turned out, the village epicerie was closed as its oven had broken down. 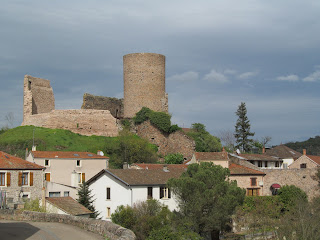 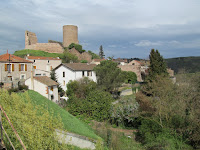 The historic heart of the village was fascinating, with a medieval tower, and various centuries old buildings. I was glad that the sun came out, and I spent quite some time wandering up and down and around in the streets in the old part of the village. 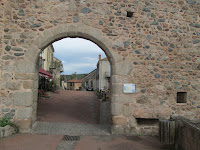 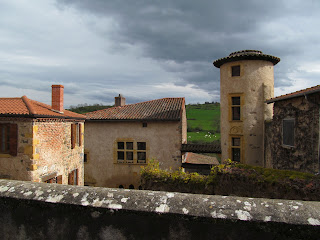 I had been looking forward to reaching this village as I knew it was on the banks of the Loire, but I wasn't ready for quite how magnificent the river was at this point.  I think I had imagined it would be still fairly small, but the Loire made some bends at this point, and was indeed rather large. 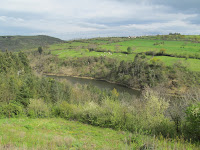 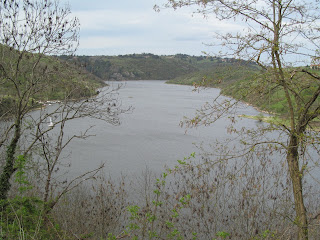 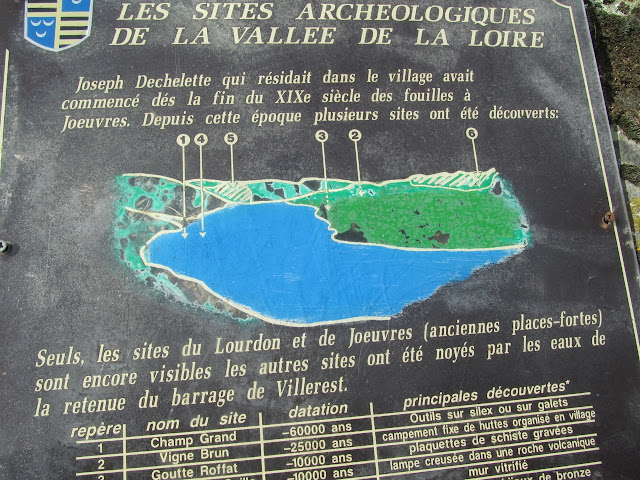 And one thing that took me completely by surprise was how long there had been human settlement in this very area: traces of human tools had been found that dated back to 60 000 years ago, and evidence of a village settlement 25 000 years ago. It made the current village indeed seem quite modern by comparison. 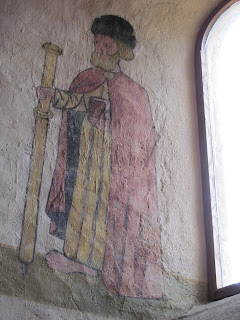 The village church held a fresco of St Jacques dating from the 13th century, and was a real reminder of the history of this route for pilgrims. 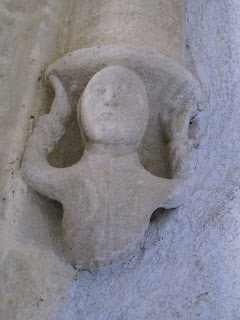 This village was yet another of the unexpected treasures that you can 'stumble upon' while walking in the French countryside.
Posted by Kiwi Nomad at 17:48