Friday 27 April
I actually made a short blog post on the day about Montverdun: you may as well read it as it was!

Montverdun
This evening I am staying in an amazing old priory on a hilltop. The Amis of this beautiful old place have opened a gite in it to welcome pilgrims and others, and as I write this the bells of the old church have just tolled 9pm. I can look up at the huge old beams over my head. What a truly amazing place to sleep in: I might dream of cowled monks roaming around!

This is my tenth day of walking and I think I have four more nights before I arrive in Le Puy. Hardest bit has been the solitary nature of it all- am looking forward to seeing more pilgrims after Le Puy! Today was my first day with lots of road walking, and although it was only 20km, a distance my feet and body are now well used to, my feet were complaining about the hard roads by the end of the day.

And now for the day's journey with some photos... 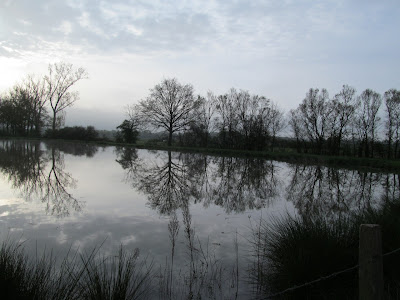 I left Pommiers fairly early so I could warm up after my cold night in the caravan. 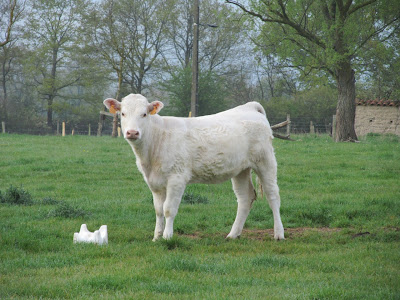 The walking was very rural and very flat. This calf is eating salt, which I presume is supplied because of some deficiency in the soil. 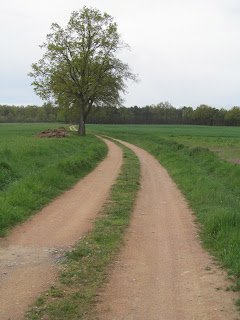 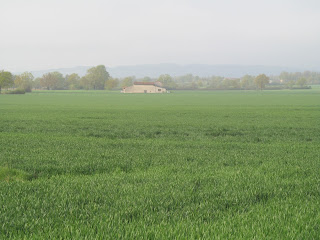 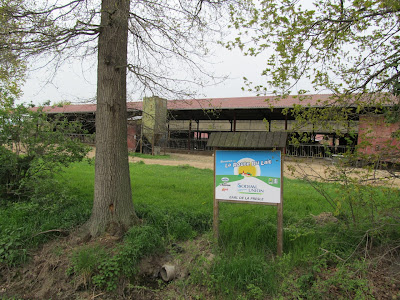 There were lots of crops planted in this area, and also evidence of dairying. I passed this shed and others, and it seemed to be a very low-tech operation compared to what I am used to at home. 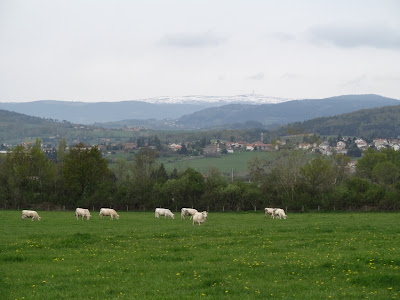 The mountains of the Massif Central were visible not too far away with snow on the top. No wonder there had been a few cold days. 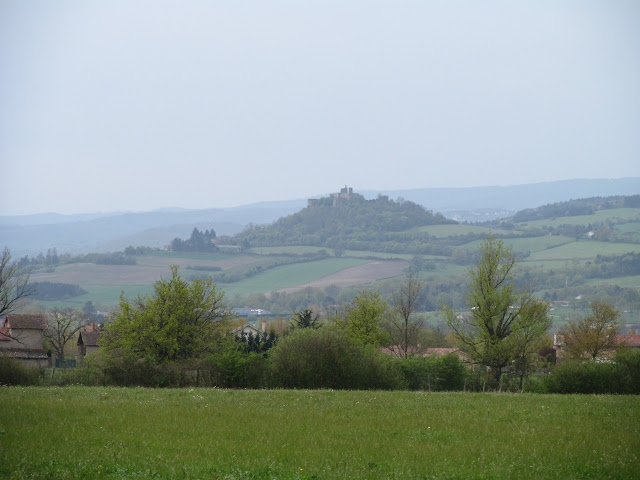 I was quite clearly close to the Auvergne region now, with small old volcanic cones popping up in the landscape, some with castles or churches on. 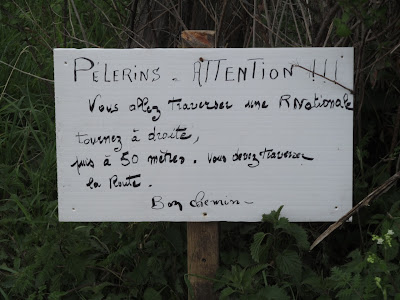 Although I hadn't seen another pilgrim for several days, someone was clearly looking out for our interests, and by each of several crossings of major highways, there was a handwritten warning sign like this. The last few kilometres of the day involved road walking on departmental highways, never my favourite place to walk, and thankfully rare enough on this chemin. The tarmac was quite hard on my feet though, and I had the beginnings of my first blister by day's end. 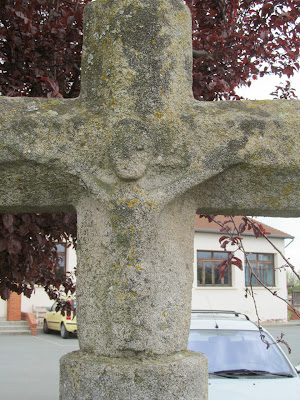 I'd bought some fresh bread in the first village of the morning, then stopped on seats by the centuries old church in Ste-Agathe-la-Bouteresse to eat my lunch. 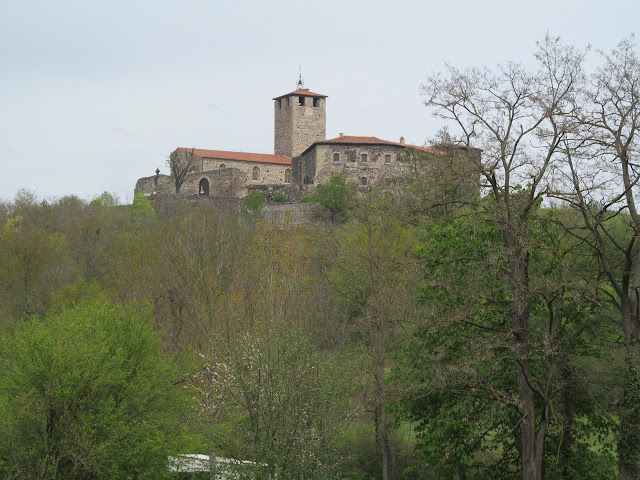 Before 2pm I could see the former priory where my day was to end- and I could also see that my day's worth of flat walking was about to finish as well, as I needed to climb the 'Pic'. It had a very imposing hill site. 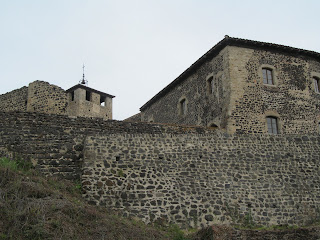 The building I was to stay in had once housed monks. It had thick stone walls and window frames. And lots of black granite that told a story of old volcanoes. It was indeed rather foreboding from below, and I was told that it was for a time a very important monastery in the area 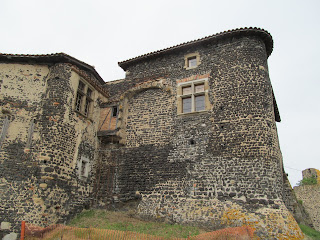 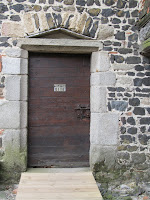 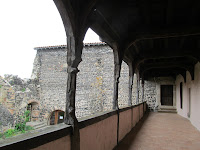 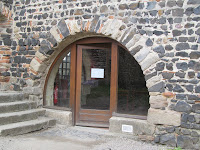 But inside, the Amis of the Pic had done a wonderful job of converting some of the building into a gite. The ninth century monks would be amazed I am sure. 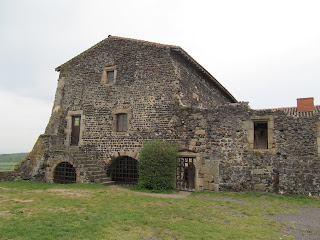 I was very well looked after from the moment I arrived. A cousin of the 'responsable' for the gîte was in the office when I arrived, and she organised me with the key etc so I could have a shower. When the 'responsable' arrived, it turned out she was a retired teacher of English, so we were able to have a detailed conversation about all manner of things. 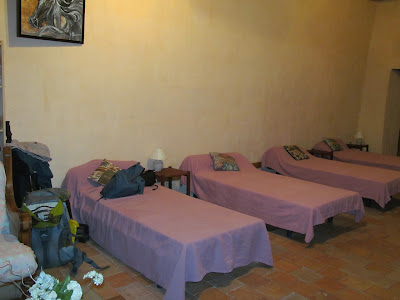 Here is the 'bedroom' in the gîte. Plenty of room, and enclosed by very thick walls. The only thing that was of concern to me was whether the ghosts of old monks might be wandering in the grounds during the night! I was the only one here in the gîte for the night, and the big thick gate was locked when the 'responsable' departed for the evening. 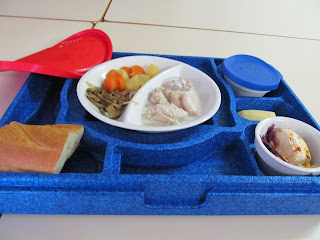 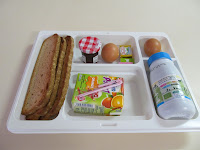 I'd been told that I could have 'demi-pension' and an evening meal and breakfast would be provided. I wasn't quite sure how that would work since I was the only pelerine... But it turned out they had an arrangement with a local restaurant, and a French meal, with its typical arrangement of several courses, was delivered in a special polystyrene tray. And breakfast was all organised for me in another tray. I just had to master how to turn on the gas oven safely to boil the eggs!

It was an early night. I had been looked after very kindly, but I was still a bit worried about the ghosts of past centuries who might be haunting the place.....
Posted by Kiwi Nomad at 17:41