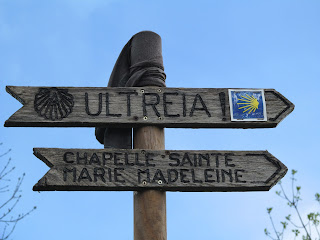 I slept soundly with the church providing protection for the gîte, and was only aware of a little light rain at times.

I needed to decide whether to stay and rest my blisters, or whether I should head out on the trail so that the last big mountain climb would be behind me. The urge to have the mountain climb over and done with 'won' and I donned my raincoat to step out in the light rain.

I was quickly surprised by the amount of broken twigs and branches along the route. 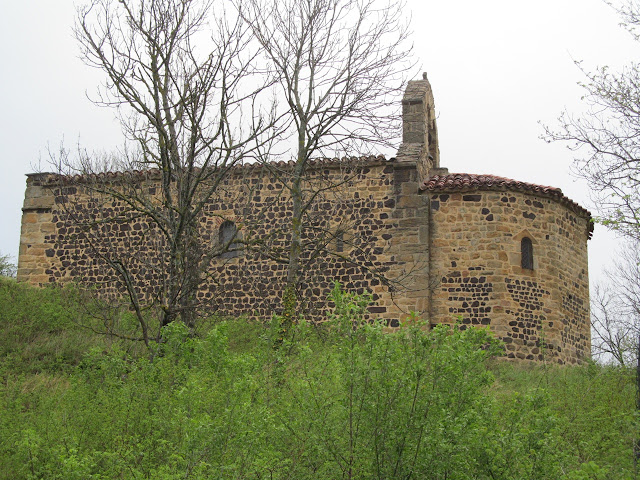 And yes, the little peak I saw yesterday was to hold my first climb of the day, up to this romanesque chapel of St Marie Madeleine on Montsupt. 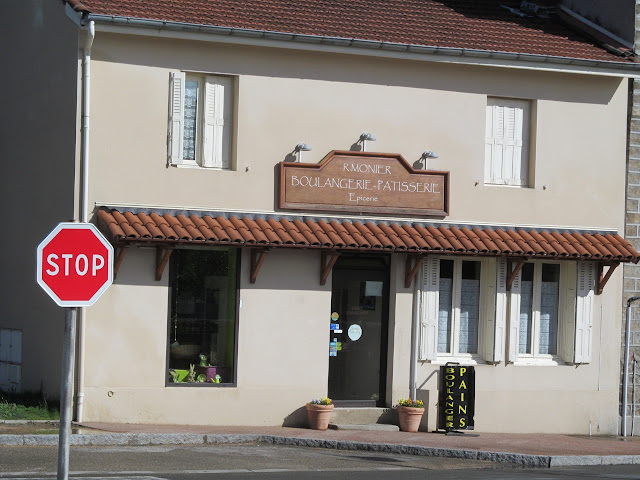 I was pleased to find that the boulangerie/epicerie in the next village was open. A woman serving was most solicitous about my welfare, and wanted to be reassured that I hadn't slept outside in last night's storm. (There are so few pilgrims in this area that I think many locals don't realise there are places for us to sleep indoors without sleeping rough.) As I had been so well protected from the storm by the walls of the old church, I was only just starting to get an inkling about how serious the storm actually had been... 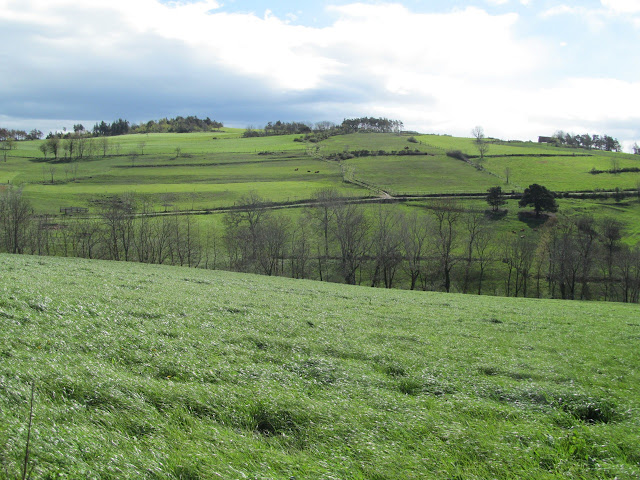 I was back in the 'hill' country, and the flat paths of recent days were well behind me, but the climbing wasn't as 'severe' as I had been fearing. 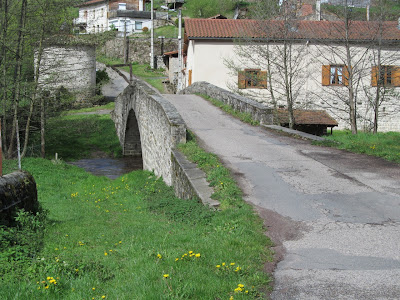 But as I reached this bridge at the base of St-Jean-Soelymieux I was given a decent dose of steep climbing again, as the path from here up to the village was very steep. 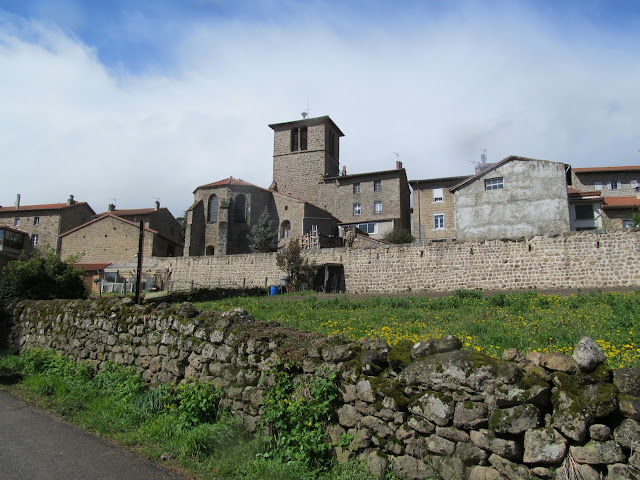 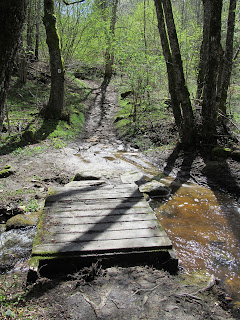 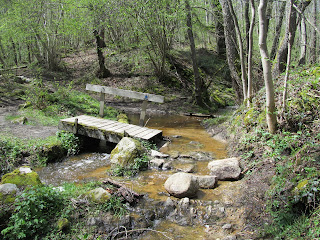 The track started to climb more seriously- but I enjoyed being back on softer ground rather than tarmac. The route was well marked, and even though not too many people walk here, there were 'bridges' across tricky spots like muddy streams. 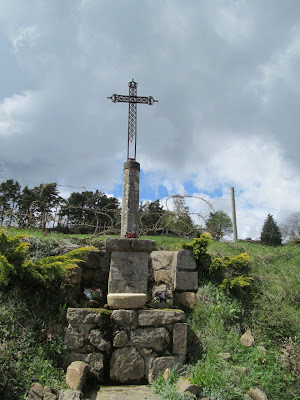 Crosses were a common feature on the whole Cluny route. 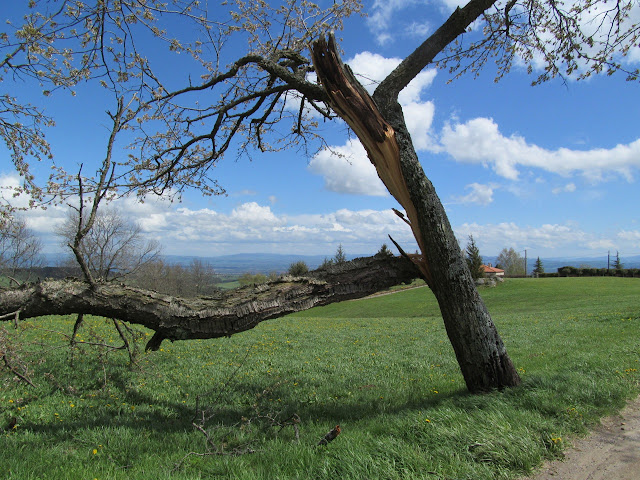 Evidence abounded for the windy storm the night before that I had slept through... 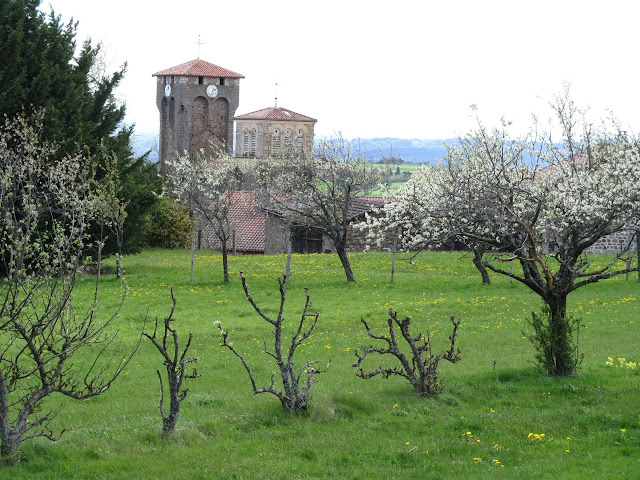 I reached Marols and lunched on comfortable seats by the church. 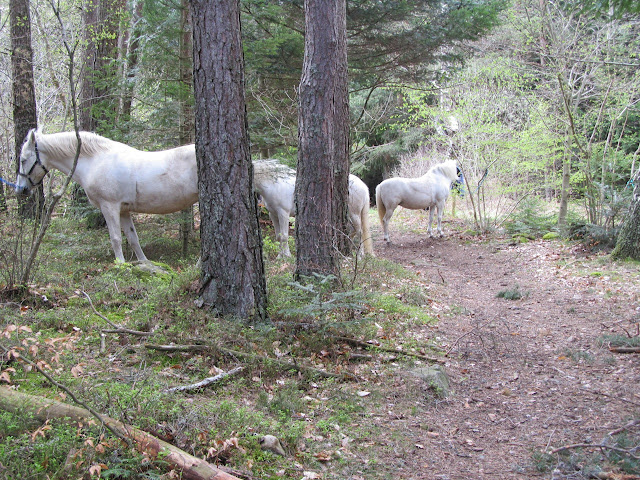 There was more climbing after Marols. I was most surprised at one stage in the middle of 'nowhere' to come upon a group of horses, and the horsewomen accompanying them. I think they were just as surprised to see me! It turned out they were making use of the long weekend for May Day to get out into the countryside, and I would see them again in the gîte. 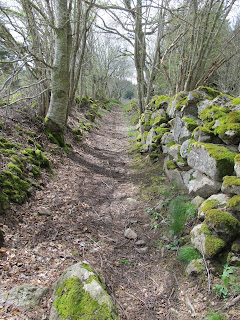 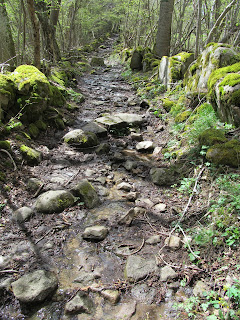 It became quite warm as I climbed as I was in sheltered forest quite a large part of the time. 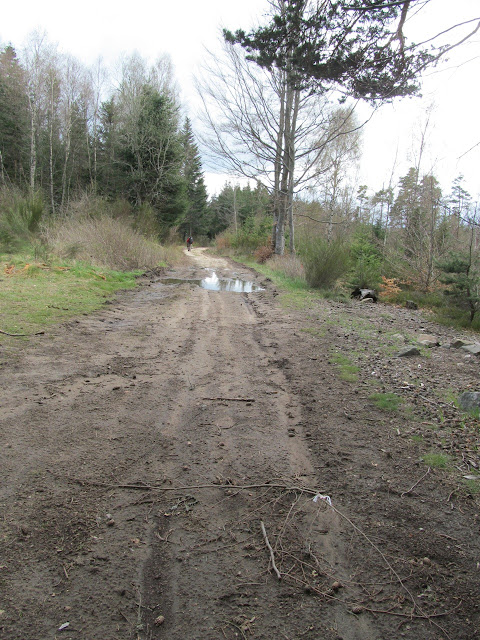 Once I came near to the top, the track flattened out, though it became fairly muddy and wet underfoot in places. And I don't know if you can really see him or not, but there is another pilgrim on the trail. I hadn't met another pilgrim on the trail since I left Charlieu a week ago, but this is Jacques from Lyon up ahead. I met him just a few kilometres before we reached the gîte. 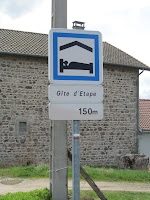 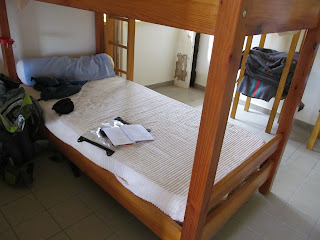 When he realised I was suffering from a blister (ampoule) Jacques was very considerate, holding up branches for me and such like. He also waited for me at the entrance to the village, showed me to the gîte, then went and searched out M Jolly, the 'responsable'. 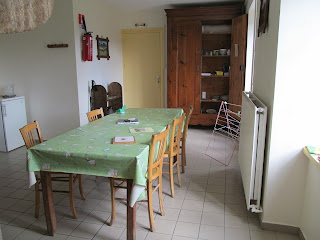 M Jolly was a very kind man, and I was glad when he told me I could rest there another night.


The gîte was very comfortable indeed. There were two parts to it, the 'petit' gîte where we pilgrims were, and the bigger section on the other side where it turned out that the horsewomen were. This was our kitchen/dining area. 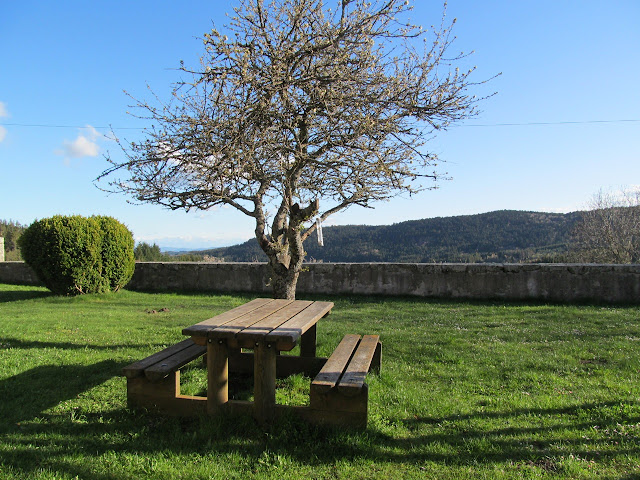 And this was the view out the back door. The sunshine was beautiful, but the wind was chilly! 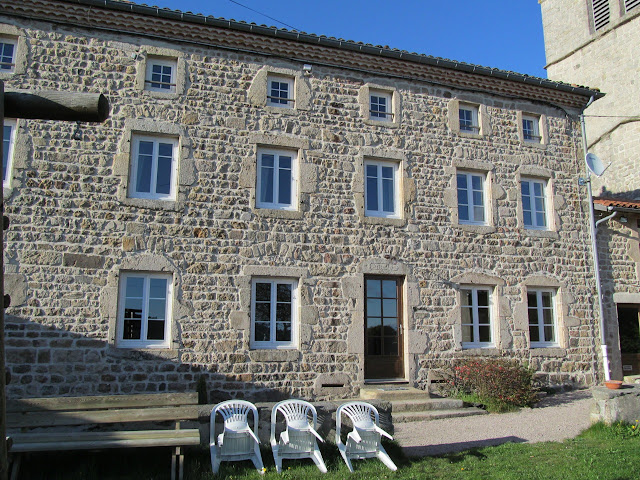 Here's the impressive gîte building. "Our" part is on the left hand side on the ground floor. The chairs must be nice for relaxation on a summer's day... 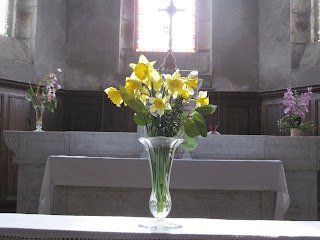 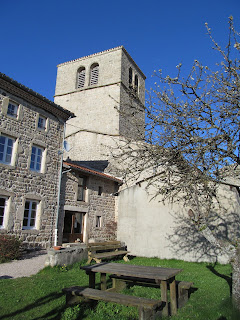 The gite was right next door to the church.


It turned out that I had two companions for the night, Jacques and Nic from Holland (who for some reason I thought was from Belgium.) Nic hauled out an iPad from his pack, and diligently typed up the day's entry. He hadn't found any wifi on the route either, but had built up quite a collection of posts to send when he found the opportunity. We ate together at the nearby auberge that night, very fine French dining.

I loved the company this evening, but I did resort to earplugs to get a good night's sleep!
Posted by Kiwi Nomad at 17:35